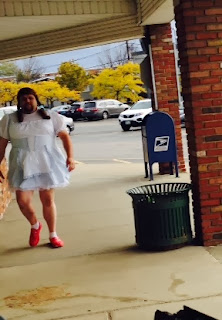 I totally get that part of this post could be tasteless. I'm not 100% clueless.

In years past I have alluded to not dressing up for Halloween. It's just not my night. I'm not clever enough to come up with a great / original costume and I have no desire to go out dressed up either.

It seems like a lot of work....and for very little pay-off.

Yes, the last time I played "dress-up", I went all dress. My one and only time in drag - and then, and only then, it was as a favour to my friend, Mitchell.

It was never the plan, as I was just helping him shop for his night out - birdseed and bras. Before I knew it, I was purchasing an over the shoulder boulder holder myself - and Morty's roommates and hangers-on all of the sudden took an interest in make-up, wigs and shoes.  Thank g-d Morty's periphery knew were to get a size 13 in a medium heel.

EEEEK. I'm hoping those pictures never surface. Last time I even saw them was the weekend of Rebecca's wedding back in 2000, because we all brought like 20 pics each to sit around the hotel room, drink and embarrass each other.

....much like this "dude" (in the title image) who worked at PetPeople but was a plus-sized Dorothy. No wonder Judy Garland did amphetamines by the fistful. I think he caught me taking the pic.

In the past I have also spoken of the one time I thought I was clever - and yes, tasteless.

Anyone can dress up as a physician during the spooky days. I wasn't clever enough to come up with the name Dr. Howie Feltersnatch. But give any schlub a pair of scrubs and they can "play doctor".

That wasn't good enough for me. I had to stand out.

The year was 1982. It was my fraternity Halloween party. I'm not sure if it was with a sorority, or just random girls showing up. Our house wasn't well respected enough (usually) to have a sorority wanting to join forces with us, so usually it was just random girls.  Random, sure, but they were known females, just not associated with the Greek system.

Get one plastic bag. A dozen eggs, cracked and put into said bag - minus the shells, of course. A few squirts of ketchup. Swirl around. 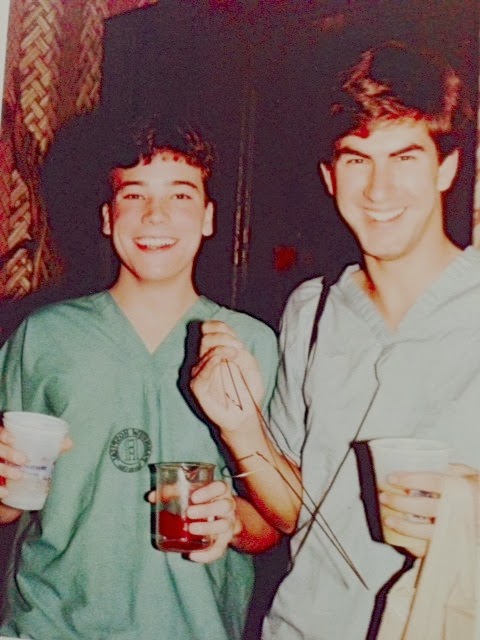 Most of the guys thought it was funny.  The women.....eehhhhhhh.....not so much. But let's face it - unlike many of my fraternity brothers, I wasn't trying to impress a female to come back to my room with me. I mean, maybe if they brought their brother along...........

As you can see in the pic, I hadn't lost my hair. However, I had lost that sign I'd been wearing which was advertising my services.

I do remember a number of girls asking me, "what's in the bag", so naturally I would show them. Invariably, the follow up question is "what is that?".

This 1983 night and my 1993 drag night are only two of the three times I remember dressing up in the last three decades. The third was with my friends Jon and FG - as we went as Julie Ivory and Snapshot - who were a sad sack band from Columbus back in the day. Ms. Ivory was a horrible host of some video show before most people had MTV in their homes - so I'm guessing 1986 or so.

My partner in crime and physician practice in the above image was a friend named Chris. He went home to Chicago shortly after this picture was taken, when he found one of his suite-mates had hung himself in their dorm room. While apparently, that myth of the university giving those folks straight As for the quarter was true, he wasn't able to bounce back from that event and transferred schools.

I am racking my brain, that somewhere in the last year someone I know (and I cannot remember who), said he ran into Chris at a meeting in Chicago - they got to talking about Ohio State, my name came up (how?  why???) and Chris told his person he knew me.  How random.

I guess this picture also qualifies at a #throwbackthursday, in which I don't normally participate. So bonus for me.......and you.

Song by: Better than Ezra
Posted by Blobby at 12:08 AM

Email ThisBlogThis!Share to TwitterShare to FacebookShare to Pinterest
Labels: Halloween

I'm dressing up this year, and I'm painting my nails in OPI Fiercely Fabulous as we speak.

My husband feels exactly like you, and would be completely satisfied to never dress up for Halloween again. I'm occasionally able to get him to do so for parties at friends' houses, but his efforts are mere tokens while I put lots of thought and work into mine. Oh well... c'est la vie!

I don't think it was tasteless. People just blink-stare at me when I say I want to hang plastic baby fetuses on the yaksmas tree every year.

We just have an enhanced sense of humor. ;-)

And people thought *I* was out of line for wanting to dress up as a racist smurf in blackface…..