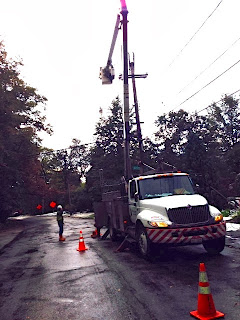 And by weird, I mean "shitty".

We went to bed to lightening and thunder. If you remember me mentioning yesterday, we had a 50% chance of snow.  That stuff came during the night.

Per my norm, I woke up sometime during the night (ok, 04:30) and checked the clock, only to see darkness.  No LED numbers.  Crap.  No power.  I would have figured that out a minute or two later, when I got up to pee only to encounter no radiant heat in the bathroom.

Damn, marble is cold when it gets below freezing outside and no heat on the in.

So, I get back in bed, get on my phone, check the news - nothing. Check First Energy and they report 190 people without power. I only think this because everyone is asleep and don't know they are without.  So I ping them to tell that we have none.  Estimated time of repair:  08:00.  Fine.

Yes, we got snow over night, but not a lot - though it was extremely wet and heavy. Even at 04:30 I could see our bushes unable to hold themselves up.

710 got dressed and went to the office, after letting Peter out while I stayed in bed. No reason for me to get up and sit in the dark.  I finished reading an book on the iPad before it lost its charge.

I ran into the electric company guys (no, not Morgan Freeman and Rita Moreno), and before asking when we'd be fixed, I thanked them for their efforts.  Two of the three were quite hunky - the third was an effeminate male or a masculine unattractive female. I could not tell.

But the hunkiest guy told me it would 'be a while' before anything was fixed.  I don't care as much abut the dark as the no heat.  You know how I freeze.

The guy told me trees with leaves were breaking everywhere due to weight.  I passed one such house on the walk. 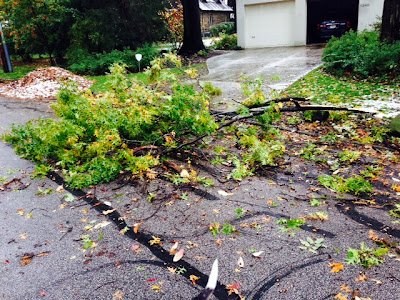 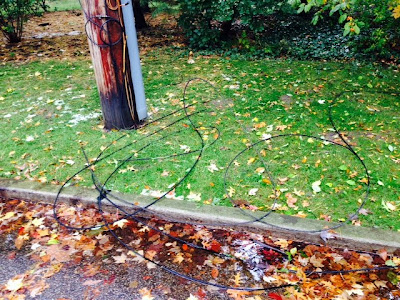 They'd already repaired these lines, but wouldn't you think they'd pick up the old, so people didn't think they were downed power lines?   Hell, it was freezing and they were killing themselves, and it wasn't my yard, so why should I care?

Petey and I did a shorter walk, due to the cold. ....but trouble was on the horizon.

As I normally do, when heading out for our walks, I locked the door and then shut it behind me.  I can get into the house via a keypad...................IF there's electricity.  But I didn't think of the extenuating circumstances and did my normal activity.  I didn't even think about it until the walk was over and I was coming up the drive.

FUDGE!   And this time, I really didn't say 'fudge'.   Completely locked out.

The irony?  710 couldn't get his garage to secure from the outside after he left, so he called me to do it from the inside.  Had I not, I would have been golden.

He was a superstar, coming home to save his pooch.........and to a lesser extent, me.  While waiting the 30 minutes in the cold, I called a few neighbors, no one was home - no doubt escaping to places with lights and heat.  So Petey and I did another loop of walking, as it would keep him warmer than just standing at the door shivering - which I was doing as well.

710 thought he'd work at home the rest of the day until I reminded him, no heat, no power, no wifi.  He had no choice but to turn around and go back to the office.

We finally got electricity back at hour 14:30 - 10 hours after it started.

Even then, it's snowing heavily on and off and we still have the issues of the trees with all the leaves on them, which isn't helping with weight of the branches and hitting power lines.  And all the while, we're still getting close lightening strikes and huge roaring, rolling thunder.

And by weird, I mean 'shitty'.

weird with a beard - how frustrating for you.

Really. You live in that mansion without a key somewhere? I think I've lost more keys than I have hidden. When you see a thief with one of those metal detectors and the headphones walking in my driveway you have found my house.
At least some industrious homeless person will get a few $ from the left behind wire. Global Warming trickle down effect.

Oh, I'd be going nuts if that happened to me. I'd have probably called a locksmith and learned my lesson the hard way.

I figure that'd be cheaper than finding a rock and breaking a front window, right?

that would kill me, since I have asthma.

hope all at your house are finally warm.

Hopefully no one got hypothermia.

I bet Sophie was just staring at you through the window, thinking something similar to "Ha! Human!"