We had a squirrel incident this last week, culminating in an escape yesterday.

A baby squirrel came upon Petey on our walk and tried to approach him. I figured, either an orphan looking for anyone or a baby looking to end its life.  He was cute, but Petey tried to get to him so badly, he almost freed himself from his harness.

Two days later, the same squirrel (I'm assuming) tried to approach Petey again - this time, the dog might have nipped the squirrel, but he got away by a few feet and I noticed a number of flies on him....not a good sign.

The next day, I saw the squirrel lying near the sidewalk - dead.  Still Petey was intrigued. I had to keep him away, but for the next few days it was like a sprint from our house to the place where the squirrel was decaying. Petey would forego #1 and #2 just to get to the site.

Yesterday, the squirrel was gone, but the scent obviously remained and Petey was still very very very intrigued.

So much so that when we let him out to pee later afternoon, he disappeared.  Broke through the invisible fence and made his way to where the dead squirrel once lay.

Ruckiry (not Jon's boss), an employee from the nursing home found him and got him on a leash. She has seen us walking him, but doesn't know us, let alone where we live.  And lucky that 710 went out to check for him to come in and found him missing.

But for the four minutes from finding he was gone (no idea how long he was actually gone) to getting him back, I am mentally exhausted.  Still!

Had he turned right instead of left, no doubt he'd be street meat - as that road is ung-dly busy, especially at that time of day.  And animal control isn't open on weekends, so if someone picked him up - who knows (even though my phone # is stitched into his collar).

So, now we can't even let him out to pee on his own - as I can't trust him. Which means lot of retraining on the invisible fence.

That all said, I still have some Petey pics.  If he keeps up this behaviour - they might be the last you'll ever get. 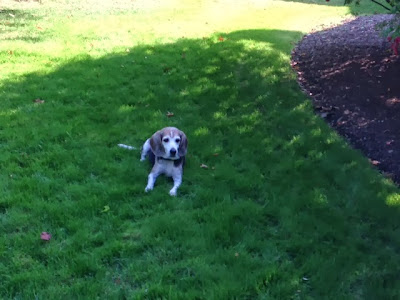 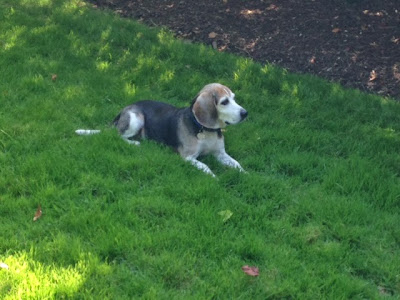 Surveying his domain in the front yard. 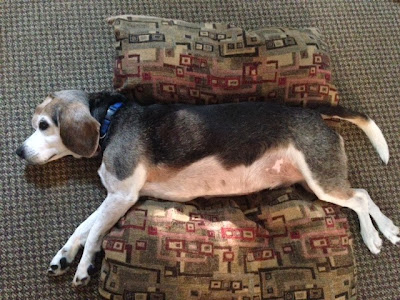 Relaxing in my / his office

Treat time, after a walk. 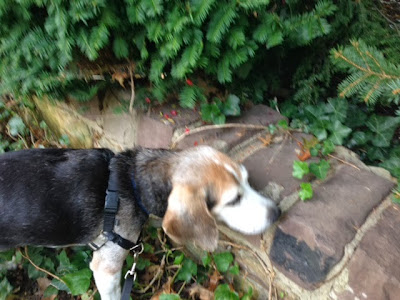 Scene of the crime. This is where the former squirrel passed on. He is smelling smelling smelling for it, to no avail - not that he wouldn't break free in less than an hour to come back to the scene.

stubborn little bugger, ain't he? could you spray the squirrel spot with some other scent to fool petey?

And I'm grieving over the poor squirrel.

I am sad about the squirrel but thank goodness Petey is safe and at home.