You Have Placed a Chill in My Heart 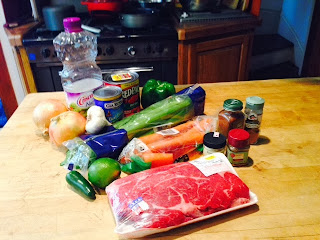 Yesterday we woke up to brisk weather....then it promptly started to pour for five hours.  And we had a forecast of 50% chance of snow.

I mean, I know it's coming, but I am not ready for it in October.  It's bad enough we have already turned on the head and have thrown the electric blanket onto the bed.

So when I was thinking about dinner - and avoiding the idea of taking Petey for a walk in that gloom - I wanted something warm.  And what is better than chili?

The only problem is, I've never really made chili before, but how hard could it be?

Oh - and it had to be beanless chili because I don't like beans.  It's more of a tactile thing than taste. And according to Sheldon on the Big Bang Theory, real chili doesn't have beans - and you know those nerd writers did their research, so I feel I am doing part of this the right way.

Turns out there a ton of recipes out there for beanless chili, and none of them quite fit the bill.....so I took the best parts from several and hoped for the best.

Cube the meat and place into oil heating in a dutch oven. Brown completely then remove with slotted spoon.  Drain off any fat from pan.  Place 1/2 cup of beef broth in pan to deglaze.  Poor contents into slow cooker.

Place onions, carrots, celery, green pepper in slow cooker; add meat on top of the vegetables.  Add spices and jalapeño on top of meat, then the other 1/2 cup of beef broth and tomatoes and juice are poured on it. 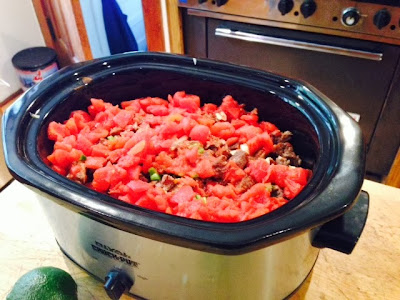 Cover and place slow cooker on 'low' and cook for 4-6 hours.

I also made a spiced sour cream mixture: 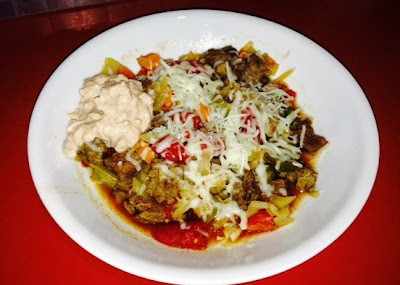 You would think that 28 ounces of tomatoes would make the dish more tomato-based like the chili most of us know - yet it doesn't.  The chili ends up being kind of like a stew, but only kind of.

I would say half-way through my first bowl (yes, I might have had more than one!), it was packing some heat. I think it was more the jalapeño than the red pepper flakes.  Or perhaps the combo.  By the end, my lips were feeling the heat - but not painfully so.

For me, I think two onions might have been at least one-half too many.  710 assumed I put the carrots in later in the cooking process because they were still fairly crisp. He likes them softer, I do not - but either way, they cooked at the same rate as everything else.

I liked it (so did 710, or so he claims) but it wasn't what I was normally used to. The flavourings were good and the dish hearty - especially on the chilliest of Autumn evenings.

Song by: the Eurythmics
Posted by Blobby at 12:04 AM

Finally - a blog title that I know instantly. I's a little chilly (se how I did that) here today but sunny - I'll have Annie in my head all day now. Thanks!

I have dozens of chili recipes. Chili is awesome on a fall or winter day. Quite a seasonal dish, in my opinion.