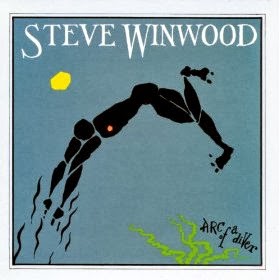 I really don't think I've done one of the Classics since July.  My bad. But I'll make this one short and sweet.

...and this month's selection is not a debut album either.  Steve Winwood had one or two solo disks before Arc of a Diver, and of course, before that he was in the group Traffic.

Save for what I consider his best song in Traffic, "The Low Spark of High Heeled Boys", I don't think Winwood has ever surpassed this album in greatness.  There is literally not a bad song on Diver.

Granted, I might hit the 'next' button when "While You See a Chance" comes on, but that's just due to decades of overplay.  I love love love the title cut,  and "Second Hand Woman", "Spanish Dancer" and "Night Train".

There are only seven songs disk, so six playable songs is still pretty good. Even "While You See a Chance" is playable, given the right mood.

The disk came out at the beginning of my senior year of high school (ugh!), 1980, and while I purchased a few of his other solo disks, none of them measured up to Arc of a Diver.

I think this selection came up because Winwood is actually touring and will be in Akron next week, so they've played a few songs on the radio - but he rotates through my iPhone fairly regularly.
Posted by Blobby at 12:09 AM