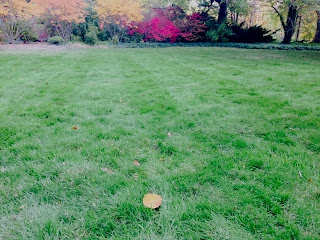 Sure, you probably see a freshly cut lawn.

All I can see the one leaf that is left behind.

I somehow blame my father, though you could substitute 'snow flake' or 'blade of grass' for 'leaf'.

Oddly enough, my father really wasn't the perfectionist he just liked what he liked and thought that doing the job right was the way to go.

Now, the joke is, neither he, nor I, can control the snow or when a leaf drops, or how many. But 710 will tell you that I feel the need not only to cut the lawn regularly, but to bag the clippings as well.

Now and again, I will use the mulching part of the lawn mower, but I don't want clumps drying if the grass is a tad too long and I don't want to see mulched leaves either.

If leaf volume is heavy, I have been known to mulch them and then bag them with a second pass over. This does nothing to reduce my carbon footprint - of which I am aware.  But 710 will also possibly agree that the lawn looks better when it is pristine.....though this time a year, that lasts about 6-7 hours.

It is the end of October. I don't know how many lawn mows I have left for 2013. Basically, I'm not cutting any grass, it just seems to be leaf pick-up.  As we inch closer and closer to (more) snow, I worry - as 70% of the leafage are still attached to the trees.  The only thing worse than leaves on the lawn are leaves on top of the snow.

Speaking of snow and keeping things neat and tidy, and lack of a carbon footprint - it is time to get the snow blower out and make sure it's ready.

Forecasts call for a normal snow fall this upcoming season, but colder than normal - which sucks because last Winter was super cold, I thought.

I'm curious about all this. Where I live, the temperatures will drop below freezing at night during winter. I live in a valley so the temperature rises above freezing when the show comes. All I get is bitter, cold rain.

But the leaves are nature's blanket!