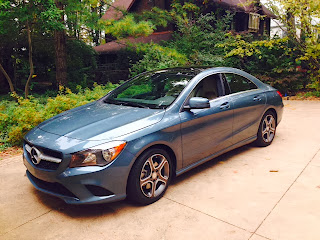 Yes, it's the new one, the "entry" level model for the brand, but I'm ok with that.  More than ok.

It's smaller than my Infinit, both in length and height, but I'll live.

There are so few times there is anyone in my car other than 710 and Petey - neither of which needs extended leg room.

I was going back and forth between the Kia Cadenza and the Volkswagen Passat - both of which had excellent leg room for passengers, even if my seat was all the way back. Not so much with the CLA, but for those short trips, I can move up.

Gadgets galore. Maybe too much so. There is lots of toggling to get from one thing to the next - it will surely be the death of me if I need to do something while I drive.

But even with the screen between the two front seats, almost everything can be displayed on the dash right in front of my eyes - from radio / iPod stuff to the turn-by-turn directions of the navigation system.

To be honest, I didn't really need the nav system - the iPhone does just fine, but it came with. It turns out, I didn't need the frickin' iPod hook-up either, as the vehicle comes with bluetooth audio.  Yup, wirelessly playing your iPhone music through the stereo.  Granted, you can't charge it without the hook-up, but you can get that adapter at Apple for $39.....which is a LOT cheaper.

I'm guessing more and more new cars will have bluetooth audio. But fewer car companies are charging for iPod hook up (though VW you have to get a higher level model to even have it as an option!).

I actually need few options on my car:  seat heaters is a must.  It's Cleveland and most of our year is Winter.  The iPod adapter, I thought I needed.  But for this car, I did want the lane assist.  It tells you if you're clear or not to change lanes, as it gauges how close other autos are to you. Normally I'd say 'no' to this, but the line of sight in this car isn't all it could be.

My model came with that warning if you're too close to a car in front of you and keeps you at a distance.  That's never been an issue for me.  There is no rear camera, which is ok, as I never trusted that in the first place, but I will miss the back up sensors that would give me a warning if I got to close to running over Timmy.

It has voice activated navigation, which is good, though if like Infiniti it could never understand a word I said.  But unlike the G37x, it does not have voice command for the phone - which is ok, since it never understood a thing I said.  This issue is able to be worked around with the help of Siri.  She'll dial my numbers through voice activation (and she gets me!) and the phone will play through bluetooth.

I get six months of XM radio, which if history repeats itself, I will continue. I also get six months of MB's version of On-Star, though this one will not just send out emergency vehicles or basic roadside assistance if need be, but they will make hotel and restaurant reservations as you drive.

Does Panera take reservations?  If not, I see no reason to keep that feature after six months.

But the sound on the stereo is superb. I can't say that about the Bose audio system on the Infiniti. I always felt I was losing my hearing (more so than normal) when trying to listen to anything. The G37x was fun to drive, but more often than not, I saw 60-75 year old men driving it, and that's exactly what I felt like when I was behind the wheel.

While entry level, the CLA has some power.  I like that.  Don't get me wrong, so did the Kia and Passast, but the MB was actually cheaper than the base model of the Kia at which I was looking. And in the big scheme of things, it wasn't that much more than the VW.

Honestly, I was leaning towards the VW until I had dinner with the cousins a few weeks back. They (mostly the females) highly encouraged me towards the Mercedes.  By the end of the meal, they had even picked out the colour of which they thought I should get.

They might be disappointed once I send the picture of the car.  I didn't go for the standard Mercedes colouring:  black, white, silver or grey.  710's car is black, so can't have two of those. I just got rid of a silver liquid platinum car.  White looked good, but they were back-ordered until December, which meant either waiting, or there'd be a bunch of them on the road.  I opted for one in stock:  Arctic Blue.

Here's the joke.  The car has been in the garage for a week, but I finally drove it yesterday for the first time (other than home from the dealer).   Hey!  My lease wasn't up on the Infiniti and why put wear and tear on my new automobile (say that last word like Long Duck Dong!) until I had to.

While I had another two weeks on the lease, I didn't want to carry insurance on both, so I got it inspected - zero damage, thank you! - and turned it back in yesterday.  Of course there was damage, but the inspector came out in that storm and some scratches and dings were hidden by melting snow and the 30 minute scheduled inspection took all of eight minutes. He wasn't invested, and I got off the hook. BONUS!

So now it comes down to naming the car.

Traditionally, there is alliteration that is involved.  Pteri Toyota.  Viggo Volvo.  and so on.  I broke tradition with the Infiniti, as Rebecca aptly named him Buzz (think about it!).

My first thought was to name this one Ruehl, but 710 doesn't like that much.  I know I'm not naming it Pebbles (THINK about it you 80's-going-to-gay-bars-boys).  710 liked the German Jew name of Morry...though the car was actually built in Budapest.

Oh and just for the record, Peter has already been in the car. 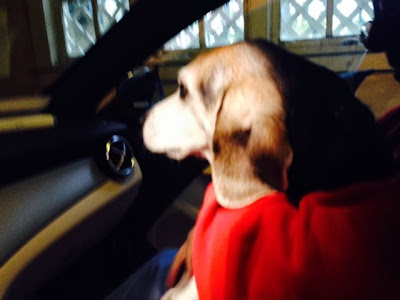 He was out in the garage as we programmed the garage door openers and did some radio pre-sets.

Song by: Janis Joplin
Posted by Blobby at 12:03 AM

the Infiniti...Buzz (to infinity and beyond!).

My first thought was to name this one Ruehl, but 710 doesn't like that much (good one; also mc cambridge).

I know I'm not naming it Pebbles (if you wanna ride in my mercedes boy...).

how about mumford (as in "the amazing mumford")? this car does everything but cook dinner!

Nice car, and I'm glad you didn't have to make a deal with the Devil for it.

I'm totally laughing! Yeah, I was looking at a Kia… but then got a Mercedes

I think you'll be glad you DIDN'T get the VW, as all the people I've known have complainted about VWs and the power windows that break and the lights that short out.

Plus let's face it: you think its more unpressive to say you own a Mercedes. I know I do. ;-)

When my friend bought his Mercedes I has to search far and wide to get the Pebbles CD to give him. Of course he loved it but he was not one to name cars - just himself.

If I were there I'd low some change on the floor for good luck.

My buddy Dwayne just bought this same model car. A white one. I prefer the Jeep he had before....