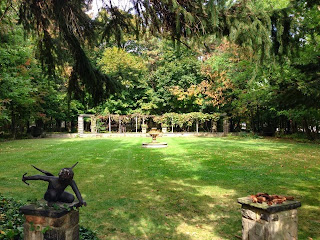 The post title was going to be 'Secret Garden', taken from a Madonna song,  but with her you just have to assume 'secret garden' means: vagina.

I'm sure her's is full of thickets and sharp pointy things.  ...and bear traps. So I went with the Cult instead.

Yet again, last Saturday David and I switched up our normal yoga-going routine to do something different.

What could possibly be the last beautiful Saturday of the year (hopefully not, but it is Autumn in Cleveland!), we did yoga outdoors at a secret garden at a place called Sanctuary on Green.

I've been down the road hundreds of times and had no idea this place existed - not that you can really view it from the road, which I suppose why it is a 'sanctuary' and 'secret'.

Part gardens, part sculpting house and part gift shop / tea shop / outdoor restaurant.  The eatery part is only open from March to well, last Saturday.  And the thought of David and myself grabbing a bite afterwards were slapped down, as they were full up with reservations and not a table to be had.  In a place that clearly of which others have heard.

I bet they were coming for the peanut butter and chocolate rice krispie treats.  I would have!

The gift shop is cute and all, but you know, it involves shopping and stuff, so I lost interest about 53 seconds after entering.

Yoga itself was nice.  We did it in the garden in the above image, but there were two other sections of garden from which we could have practiced.  But this one was so much closer to the marching band which I mentioned in Monday's post.

I've said before, the best case scenario with early morning yoga on grass is dew. Then it just deteriorates into mud scenarios.  But last Saturday was just dew and that was fine.

Yes, I fretted about getting my wet feet on my mat, but then horror or horrors, Bri made us walk around on the grass getting in touch with the Earth.  Great - now my feet were wet with grass and leaves stuck to them!  But Bri (sensing I was out of sorts?) told us to let go of that  and eerily enough, I was able to. So much so that for much of the practice we could continue or practice on the grass or the mat.

I would say I did about a third of the practice on the lawn, which turned out to be great. Yes, my hands slipped due to the dew (great, now I'm writing for energy soft drinks!), but I truly didn't care. It was all quite freeing.

It was a small, but great group of people with which to practice. 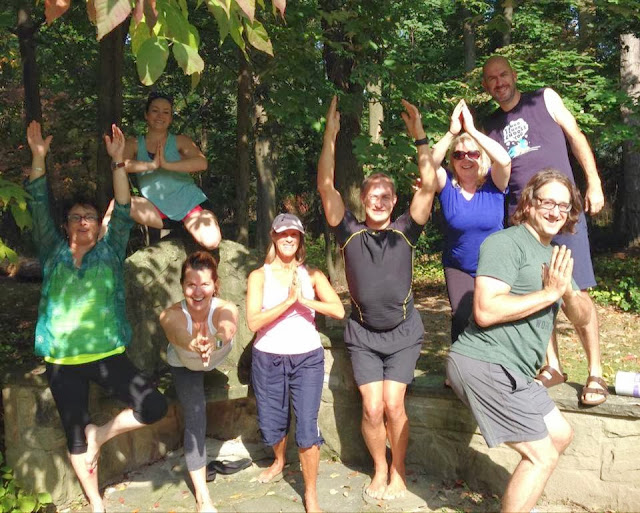 The shadows aren't working for this photo very well, but whatta gonna do?

I'm hoping we get one more outdoor practice, somewhere, before it's no longer possible for this calendar year.

"I'm sure hers is full of thickets and sharp pointy things...and bear traps." - got news for ya: most ladies are like this, except for hos.

I went to a secret garden once. T'wasn't my cup of tea. I'd already suspected it wouldn't be, but felt I could never really know for sure until I visited at least one.

I remember wondering how many minutes I should spend pretending to enjoy the dew on my face before making an excuse about an early meeting. I hope two and and a half was enough.

It did explain Georgia O'Keeffe's take on horticulture though.