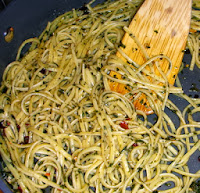 In another attempt at cooking two nights ago, I did an ok job, though I think my lips are still burning a little.

I was messing with the chicken-broccoli-pasta dish I made about a month ago, only this time I left out the protein, and the broccoli.

There are a ton of recipes out there for this, all a little different. I read a few and made a combination attempt - one that needs tweaking, but is a keeper.

I also forgot to take pictures, as I was trying to throw everything together before 710 came home, bringing his sister with him.

The dish is super simple and takes more time to chop the garlic than it does to put together.  Ok - maybe that is a little stretch, but it's not bad.  Most of the recipes out there are for a serving of 4, but I was making it for 2.  710's sister wasn't eating with us, as it turns out.

If you're making for more than 2, double up most things.  I will note where I deviate from the amounts.

1/2 lb of spaghetti
1/4 cup of olive oil (most will say this amount for a full pound of spaghetti, but you'll need it for the half amount)
5 cloves of garlic - coarsely chopped, not a fine minced
1/4 teaspoon of crushed red pepper flakes (I used a heaping teaspoon and it was a little too much).
3 teaspoons of anchovy paste (or 6 anchovy fillets) *
1 cup pasta water
1.5 teaspoons of butter
1/4 cup of chopped parsley
1/3 cup of grated Parmesan cheese
Pepper
Salt *

Chop garlic as salted water boils for your pasta.  Spaghetti cooks for about 10 minutes after water is to a boil.

Over medium heat, in separate skillet (a deeper one, as you will add the cooked spaghetti into this later), heat the oil, add the red pepper flakes, garlic and anchovy paste and mix until the anchovy paste breaks down and incorporates into the oil / pepper / garlic mixture.

Though it shouldn't have to be said, turn off the heat if garlic is turning golden brown, it will continue to cook, but do not let it burn!  Add the butter (though butter is not called for in almost any of the recipes, it does provide a richness and silkiness to the sauce).

Right before pasta is done, reserve the 1 cup of pasta water and incorporate it into the pan of oil / pepper / garlic / butter.

Drain spaghetti and and add to the pan with the sauce. Mix the pasta and sauce together, letting the sauce absorb into the pasta for a few minutes.

Add Parmesan cheese after dishing up into plates or bowls.

*Salt is in all recipes to be added with the pepper, but with the salted pasta water and the anchovy, additional salt is not really required.  Tread carefully on this - but obviously add to taste.


Many recipes called for much more crushed red pepper, and while I like that, even the heaping 1/4 teaspoon I used burned my lips and caused my nose to run.  It was wicked hot even the next day with leftovers I had for lunch.

I thought I would miss the protein or veggies I usually put into my non-marinara pasta dishes, but it was not missed in the slightest.

Prep time is minimal.  Cook time is maybe 15 minutes.  MAYBE.  I even had plenty of time to make a salad during this - and clean up time was a breeze.

This will definitely be back.

And while the title image is not mine, I can guarantee you (honestly) mine ended up looking just like this.

this simple dish remains one of my favorites.
It is a better comfort food than M&C.