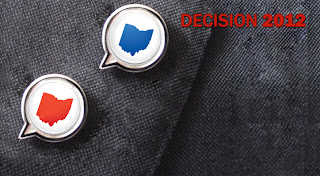 As goes Ohio, so goes the country.

So says "someone" when describing every presidential election ever. Allegedly, no Republican has ever won the White House without winning Ohio.  Cool.

We are not a fly-over state. Not by a long shot.  More political ads are run in Ohio than any other state. NBC News says an average of 333 ads per day are shown in the Buckeye State.

We are the brunt of every campaign stop and the pressure to deliver - whichever political party you're affiliated with - that's why we are bombarded.

Ads have been playing here since April, not as heavy as they are now, but still it has been continual and relentless. Every single commercial break on tv has one Mittens ad and one Barack.

Don't even get me started on the fucking Josh Mandel ads. That man gives Jews a bad name.

The New York Times has a great article breaking down of how Ohio plays into the 2012 election. It is not necessarily pretty, but it gives me hope.


Song by: Gillian Welch
Posted by Blobby at 6:16 AM

Did Josh Mandel reach puberty yet? I know before we left he was getting close.

I am thrilled to live in Louisiana where we don't have to see any political ads. ;)

A friend lives in Iowa and is equally bombarded during the primaries. I feel for you man, must be awful. Thats is why I love NPR!