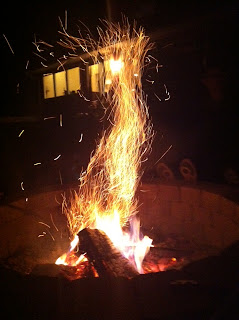 This is what we did last night: celebrated Rebecca's birthday. It was a faux surprise. Her daughter leaked the info days before, though she might not have truly known I was showing up.

'Twas cold out....but the fire helped. And of course, the alcohol thinned blood made me think I was warmer than I was.  That is how one would freeze to death, had there not been a domicile 200 feet away - which is where I eventually went into.

I'd have put 'Felines' into the top list, but Rebecca & co currently do not have any cats, but they do have two doggies. I almost brought Petey with me, then 710 decided to stay home, so he was his primary caregiver. Or Petey was his. Or both.

Barkley, their bigger dog, is a sweetie. He's a love lump.  But their puppy, Lily, i so fricking cute - though she has razor sharp puppy teeth. 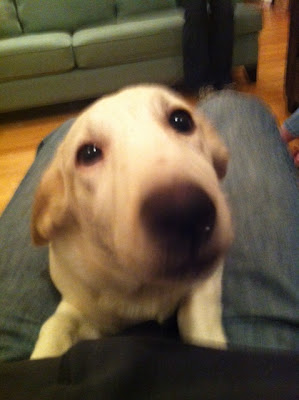 Ditto was telling folks the more poorly behaved dog, the better I like them. Not really true, but Lily is a puppy, and cuteness lets you get away with a lot.

Now it is off to breakfast.....well, eventually. At least in the near future.

A night time fire! What a treat! I haven't had one in years, and I love them so.

No cats? That's just not right.

Erik I agree! But Barkley has already chased 2 away and nearly killed Morty's cat Bruty.

Blob you failed to mention that I appeared for my surprise in gold lame!!