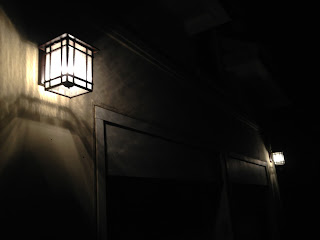 I go away for a few days and 710 installs lights on the outside of the garage.  We had one fairly bare bulb that was worthless.

These might not be our forever lights, but they look good - if not a little Frank Lloyd Wright-ish.

Our house is about 80 feet from the street and hard to see. It's pretty dark.

Dark enough that you can't see animals - mostly skunks - when you walk Peter at night.

We also don't get any trick and/or treaters due to the scariness of the walk up to 1313 Mockingbird Ln.

This isn't such a bad thing. In seven years, we've never had one kid come to the door for candy.  This might change.

These two lights actually light up the top part of the drive, but a good portion of the front yard.  Yes, 710 also lit up the part of the house to the right as well. 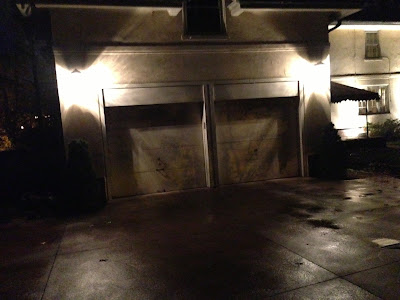 Given time, money and well......the inclination, we might light the other 70 feet of driveway. But it probably has to do mostly with money.

If the darkness keeps the kids away, that sounds like a good plan to me.

You know, you can simply turn off the lights and hide out in the dark of your house to avoid the little uterus turds.