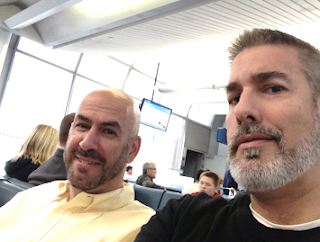 It is safe to call this first.

In my travels, I have run into people I know at airports, but it is also safe to say they are usually current or former friends or acquaintances.

I got up at 03:00 (Pacific time) to catch the 04:00 hotel shuttle to their airport. Don't get me started on the live entertainment they had in the hotel lobby which went on till 21:00 - and I needed my beauty sleep.

Sorry, but if you must have amplified musicians - in a hotel !!! - then you better have sound insulation for all those fucking people who paid to, oh you know, sleep in said hotel.  Like me.

So, I flew from Phoenix to Chicago and had a scheduled lay-over for almost two hours. Yet while checking the board of flights, saw one was leaving for Cleveland in 30 minutes. I hightailed it over the two gates to see if I could get on that flight instead.

As I approached the ticket agent, who should I see sitting at the gate than one CB from the Mangina Monologues.

Of course, we had commented on each other's blogs over the years, but neither have ever had the chance to meet, as I don't get to Minneapolis......ever. He wasn't exactly going to Cleveland, but landing there and going to Cedar Point.

Yes, I recognized CB from his blog - scary, ain't it?  But it was an unexpected blogger meet-up, right there at B10 in O'Hare.

As it turns out, I got my flight changed and even ended up sitting on board with CB for the entire 48 minute flight. He was fun and comfortable to talk to - so it was a breeze. I hope the weather holds out for him for his Cedar Point adventure.

....and I got home about 90 minutes earlier than planned.

All-in-all, not a bad end to the week. 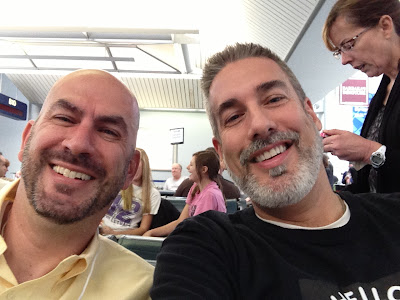 I don't know who the lady who photo-bombed the pic was.


Song by: Bruce Springsteen
Posted by Blobby at 6:55 AM

I'm in Ohio for the weekend, and Greg and I drove past the Cleveland airport on 480 last night at about 5:50 on the way to Greg's parent's house. A plane practically landed on top of us as we drove by. Wouldn't it be something if that was the plane you and CB were on? Talk about a convergence!

That's a whole lot of blogger sexiness for one photo.

Oh my. When worlds collide...

It looks like photobomber lady is shaving CB's nape. Which he probably needed to have done anyway.

Oh, and you're actually smiling in a photo! And it's not scary!!

LOVE those pictures! And what a great story. I'm so glad it was easy for me to meet up with you. There are some great people--especially in Canada--I'm afraid I'll never meet unless it's by passing in an airport. You lucky guys!

That must have been fun.