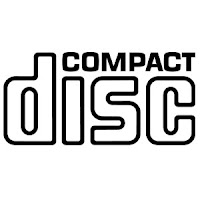 I forgot to do my post on the Compact Disk turning 30 years old.    ...that's like only 7 years younger than I am.

Since Billy Hole's Joel's 52nd Street was the first commercial album (?) compact disk release, I'm surprised the medium went anywhere. You couldn't pay me enough to own that album, let alone on a disk that won't wear out.

The compact disk has lasted longer than the cassette and, well definitely the 8-track. It has yet to outlive vinyl, but hell, even that made a comeback, albeit a pricey one (the new Aimee Mann on vinyl is $25!).

Turns out the player cost nothing compared to the price of the disks. Of course, then CDs used to cost $18 - and now they're what, $10?

And my friend Jon will remember, the only place you could get them in Columbus at the time was a place called CD Jungle and then For the Record (which ironically sold no vinyl).

I actually bought my first two CDs before I got the player - and both because of Jon: Laurie Anderson's Home of the Brave and Kate Bush's  The Hounds of Love. They were great and still are.

And while the medium still might be produced, and might have a less compressed sound quality than .mp3s, I haven't purchased a physical CD for over six years. My hearing cannot tell the difference between the quality and I have no desire to store these things anymore.

That said, I haven't been able to part with the 400 disks I currently own. Yeah, they're all ripped and on a hard drive - and backed-up - but I can't quite get rid of them.....and yet have not touched one for years. You know.......just in case.

Jon used to make fun of me (he probably still does), because I alphabetized them by artist and then album title. And yes, if you opened up the case, the disk was upright.  I had an OCD problem.

But that crap about CDs never skipping or popping is a bunch of bull. I was very careful with mine, but shit happens.

The best thing about the medium was the recordable disk. Oh, how I made better music for my car, since I could pick and choose my own songs.

What will become of the compact disk?  I know folks who still buy them, but I can't imagine how it will sustain itself. The music industry has gone back to the '50's where people buy singles (or single songs). It's now longer album driven.

But for now, I have 400 of them, taking up shelves and shelves of space.

I don't have any CD's anymore. I digitized all the music and then gave them all to charity. Now instead of huge shelves holding plastic discs, I now have a compact 3 Tera-byte drive.

I still buy the occasional CD when I can purchase it directly from a musician, but that's rare.

I still have all my CDs as well. Stuck in the back of my closet in large boxes. I'm not sure why I haven't parted with them as I have them all ripped to mp3s. Maybe I hold on to them just in case I want to re-rip them to a better quality at some point. I'm kind of an audiophile like that.

I'm like you and like my music in alphabetical order by last name with albums in order first release to current. If an artist goes solo, then they are put with their group. Soundtracks, Christmas, Comedy, classical or opera (I don't have Broadway music) have their own sections.

Because I lived in small apartments, I took all my CD's out of the cases (this is before I went digital) and into CD books with the CD on top and the cover/booklet below.

I still prefere CDs, and tend to buy them over downloaded music. Ours sit (unused) in a large dresser, as they are downloaded into the computer. Still it doesn't feel the same, not having the paper insert with lyrics and photos.

I own less than 20 CDs. The first CD I bought was Garbage's self titled, but that was only after loving the CD for 2 years. It was the same for Ben Fold's Five's Whatever and Ever Amen.

I used to go to CD warehouse on High Street, I know it changed owners at least once while I was at OSU so I'm sure it went by a different name when you were there, and I would by about 10 CDs for around 20 bucks. I would rip them and burn them onto my hard drive.

I remember when my dad bought his Sony CD changer with his tax return. He had to order it from Crutchfield, and it still cost about $500. When he wanted to buy CDs we had to drive into town, or call up to National Record Mart and see if they had it. If not, it was a special order. I remember when I finally talked him into buying a CD burner back in 2000.