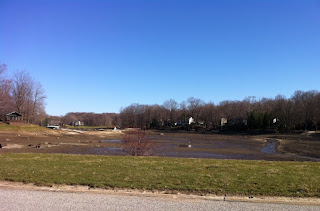 The house I referenced in a blog post earlier this week, that my parents building 42 years ago (and in which they still live), sits in a community with a lake.

Honest. Normally it has water.

Not these days. Nope, it's void for water for dredging. Currently it is a mud pit. I'm not sure what they need to dig it out for. Better water flow? Less sludge? Fewer mosquitos due to shallow water? I have no idea. I do know that when my sister was treasurer of the 'hood over a decade ago, the estimates to do this project exceeded a half a million dollars.

I'll assume it is even more now. Probably double.

I don't know what its worth is - as there is no direct return on investment when it comes to summertime fun. But as a kid growing up, I used that lake so much for our summer fun and my parents loved it that we were out of the house for hours on end. I'd say it was mostly for swimming, but hijinx that ensued there too.

"Burnout Cove" existed here. You'll have to figure that one out on your own and what went on there. It was also a place where juvenile delinquent Blobby participated in activities that might gotten him better acquainted with the Johnny Law.

I seriously do not know what happened to the Wagner's pontoon boat. We never took it out of that lake, just left it adrift and swam to shore after we were done with it. Honest.

ummmm....the golf cart that ended up in there? I plead the Fifth on grounds that I might incriminate myself. ....though the statute of limitations have probably long since expired, right?

Still it was a great place to hang and swim. Even now, if family is visiting from out of town and staying with my parents, I will go down to be beach and swim. The nieces and nephews like it when I let them hold onto me while we swim out to the deep end to some anchored rafts.

The big two story tall slide is gone - too much of a liability, considering you had to climb the ladder with a pail of water in hopes to have something slickery to make it down the scorching hot metal and into the water without having 2nd degree burns on the back of your legs. Hell, Greg Althans was the only one to fall off the thing! Hardly enough reason to take down the slide!

There had a been a pump to get water to the top, but that broke around 1973, so we carried buckets up one by one, step by step. Now and again, there was a pail and a string that you'd haul up to the top, but invariably, someone would steal the pail. Bastards!

Both the high and low diving boards are gone too. Same liability reasons, I suppose. I still remember the day the lifeguard spent hours with me helping me to get over my fear of jumping off the high dive. After that, you couldn't keep me off of it.

Hopefully the lake will be all up and operational for Memorial Day and that the families and kids have some place to go on those hot hot hot summer days.


Song by: the Watson Twins
Posted by Blobby at 6:17 AM

Email ThisBlogThis!Share to TwitterShare to FacebookShare to Pinterest
Labels: Family, Growing Up

I'm not sure what they need to dig it out for.

That doesn't look like it gets any deeper than three feet. No wonder they took out the diving boards.

I had a creek a block away that was awfully fun. A lake would have been better, if not for the alligators.

I wish we could go back in time to observe young Blobby at work.