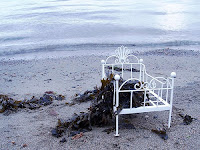 I wonder what's like to sleep for what the medical industry likes to call the recommended amount?

The number of hours is something like eight. You can cut that in about half for me. Maybe a little more. ....and not in a row.

This last week has been especially bad for me.....sleep-wise. Oh, I can still fall asleep at the drop of a hat, which has always been my M.O., it's just that I can't stay asleep.

Bedtime seems to be getting later and later. It's not that I'm not tired, it's just that I like to think that if I go to bed later, I'll sleep later. Yeahhhhh.....that's not working.

The dreams have been heavy, but forgettable. The anxiety attacks however are very real.

I try to thwart both of those things with reading my book and/or doing a crossword right before lights out. Normally it helps, but not lately. Not this last week or two.

I should be way more exhausted than I am. For the decade and a half of my pseudo-sleepless nights I've adapted well - at least for the most part. This last week, not so much.

Sleepy-time drugs are not my thing, at least in theory. I have never used them and don't really care to start. I'm ok with 5-6 hours of sleep, even if interrupted. It's worked for me the since the turn of the 21st century. But less than that and waking up with a thumping heart beat and sweating is pushing my limits.

I will get it under control. It's just a phase.

Song by: Michelle Shocked
Posted by Blobby at 6:06 AM

I had exactly that experience last night. Fell asleep around 3AM and woke up swatting at giant spiders in my dream. I don't usually remember dreams, but this one is quite memorable. *shiver*

I've had insomnia issues for the past ten years, off and on. It's a common problem in aging. Since lack of sleep can make you gain weight and wear on your heart, sleep meds might be a temporary help.

Damn, I can only imagine what you would get up to on Ambien or Lunesta.

I hear stories of people doing shit and not remembering

A glass of wine before bed might do the trick.

Yes ! it is just a phase!
There is no 'right amount' of sleep.
Our sleep needs/our sleep quality is forever going up and down like the stock market.
I have to continually instruct patients 'this too shall pass' and some insomnnia is NOT a sign of permanency nor is it a sign you need Ambien forever.

Don't let anyone fool ya.