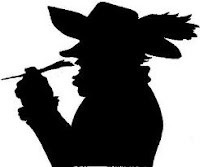 I'm already a day behind him, but I'm also on the last day - then it's back to my regular blogging schedule. So here you have it: Secret Loves.


You know how I said one of Stevie B's other topics were the hardest. I take it back - this one might be. Not that I'm (too) embarrassed to write about a 'secret love', but maybe because it is too close to the Crush/Lust one.

Of course, I guess it could be a love of anything: Andy Gibb songs, Jewel's poetry, or the PWT* way I love to eat peanut butter and jelly on Saltine crackers. Oh the shame. By the way, only one of those three things is a truth. I'll let you figure out which one.

In my mind, I made up love (human love, that is) - but I doubt it was love. I was too young to know the difference. I've mentioned him once. Chris. Well, Christ - he dropped the 't'...and not pronounced in the Jesus-y kind of way. Thank g-d!!! .....pun totally intended. Greek by nature he was.

Cherubic in his face, but what a face. Handsome as all get out. Nice as could be and liked me for me. ....acne and bacne included....though things never got to a point where he saw anything but the zits on my face.

We hung out of a few months and both were oh-so-tentative on saying the word 'gay', that well, we actually never said it. We never said we liked each other or that we wanted more from each other (yes people, I'm talking about s-e-x). So nothing ever happened.

Naturally I am assuming he did like me and wanted more. I'm not assuming he is gay. Not anymore. I did run into him a few years ago - the first time in 20 years - with his partner.

But between that time, while I knew he was still in Columbus, I started going "out" and never ran into him - and trust me, I was going out so often if he had, I would have encountered him.

So, was the love secret? Yeah. Secret for both of us.

I think the bigger question is - was the secret, love?

I have enjoyed these recent entries; I feel I am getting to know you better. thank you for posting them.

I have to agree with Ur-Spo. Thank you so much for sharing apart of you with your followers.