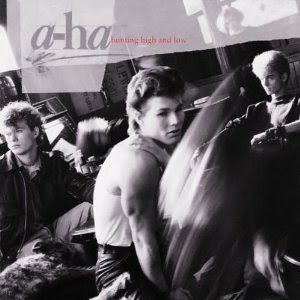 Fine. Have you gotten it all out of your system now? Good.

Now axe yourself (no....don't go all Lizzy Borden on me!), besides the massively overplayed "Take on Me" - have you even heard anything off of a-ha's Hunting High and Low?

Is it the best album out there? No. Is it the worst? Far from it. But it is also not as bad as one might perceive it from their only true U.S. hit.

Truly, there is not an unlistenable song on the disk, though admittedly, even I hit 'skip' on "Take on Me". Mostly because it is overplayed, but even for background music, it is doable. Yes, there is a lot of synthesizer action on the album, but it was the 80s. But it's not all synths either.

Is the disk groundbreaking? No. But then maybe I have no perspective, considering I've owned it for {gulp} 26 years. But when you listen to it, similar stuff was being put out all over Europe and even the Americas - so no it was not ground breaking. a-ha just did it better than some of the others.

I'm a big fan of the title track and "Living a Boy's Adventure Tale", "Love is Reason" and "The Sun Always Shines on T.V.".

They try for some slower numbers, but even those seems more upbeat with the heavy synth action.

I expect no one to give it a listen, but as debuts go, it is not a bad one, though they had much better stuff on their follow-up disk.
Posted by Blobby at 5:33 AM

I had this LP. In fact, as many of us in college at the time felt the need to alphabetize, it was often in the front of many a dorm room album collection.

A-Men! A kind of macho guy band by your standards. I loved the first video more than the first album I like High and Low the best, I know, very poppy but those were the times. Somehow i managed to stay in synth pop with bands like Red Rider and not fall into the Kenny G hole. Great review.