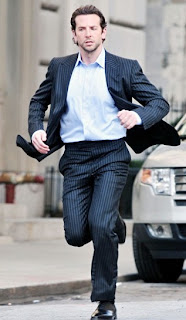 Yup, we made our second movie in a month. Hell, we made it to two movies in eight days! So if you go by the average of one movie a month, we are almost on schedule. I think we can do this.

Anyhoo, we went to go see Limitless on Sunday. Becky had gone to see Paul (not her brother, I clarified that) the night before and was going on and on about it via SMS, but I think she might have been drunk.

Limitless is good. Actually, it's pretty good, but certainly not great. It's got familiar elements you've seen in most movies, it is just that they are done fairly well.

If you've seen the previews, you get the gist of the storyline, so I won't go into any spoilers. As you get into it, there are certain questions I had about "if he's soooo smart, then why didn't he think of...(fill in the blank)." I suppose that is a minor detail.

You know me, it's hard for me to suspend my disbelief. I am my father's son after all.

I suppose it is a plus that Bradley Cooper can somewhat carry a role. I mean he could carry the role on his looks, even if he couldn't act his way out of a paper bag, but he can pull off the other stuff besides just looking handsome.

Denton leaned over at one point and said "the camera sure does love him". I countered back in my best Homer Simpson only thinks he's whispering whisper (you know how that goes, right?) "not just the camera!!!!"

He can also wear a suit.

I will say this about Mr. Cooper: the movie camera is way more kind to him than a still photo. I searched and searched for a great one to use here, but moving pictures do him more justice.

...and now that he's finally allegedly broken up with Renee Zellweger I finally have a shot at him. Oh, who am I kidding? I have a better chance with that sweaty puffy coke whore.

I know I'll get shit for this, but I don't see the big hoo-hah about Robert DeNiro. He's fine and all, but all the accolades he gets? Have you seen those shitty Focker movies? Or Falling in Love? He's made more of those shitfests than he has of Raging Bull or The Deer Hunter.

The few reviews I read after the fact about Limitless just love him. Personally, I think they are too afraid to say anything bad about him. Pffffft.

I'll say it: he was average. Just average.

So yeah, it was worth a Sunday afternoon matinee price. Just make sure you buy a box of Milk Duds. Oh, and if you do, make sure you finally open them, eat some and not leave them in the theater. That was a waste of $3.75.

Oh - and zero good previews. They were 0 for 5 this time.

Song by: Fleetwood Mac
Posted by Blobby at 6:11 AM

filmed in my hometown! FTW!

It's nice to see that you're getting out to the cinema more. Do you guys do a lot of talking during movies? I can't get Greg to shut up, and it drives me nuts.

When Greg and I got into bed last night, he said he wanted to go see a movie tonight (Wednesday). Maybe we'll see this one, but more likely we'll see Battle LA.

And I didn't even like him in Raging Bull. Milk Duds? Yuck. The only thing worse are malted milk balls.

Haven't heard of the film nor the guy that's easy on the eyes. I need to get out more.