Yes, over the weekend we went to a basketball game. A professional one.

Well....professional should be in quotes. It was the Cleveland Cavaliers.

I'll be honest, Denton got the tix through work. Good seats, as you can kind of see, but it means nothing to me. I don't care for basketball. I don't follow it per se. I certainly no none of the players.

We watched ourselves go from a nice lead in the first quarter to our eventual decline and loss. To be fair, we didn't stay for the loss, we left at the beginning of the third quarter. I just can't commit to the sport or the team. And let's face it, the Oscar pre-show was on, what is a homo to do?

That all said, finally - FINALLY - someone went out and captured this as not just a phrase. 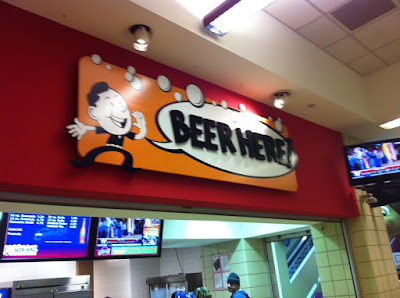 What took someone so long?

"...eventual decline and loss" Inevitable is more like it.

baseball's coming, honey...one month from today is our home opener. I CAN'T WAIT! I got to listen to a spring training game on the radio on sunday; I feel my depression lifting!

I think the beer guy needs your glasses.