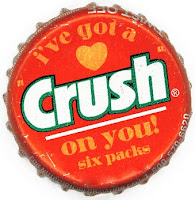 What gay boy doesn't have crushes or lusts? What straight boy doesn't, either? Hormones run amok in the teen years and dealing with your sexuality and going to an all-boy's school just is a trifecta for overload. I was that boy.

Yeah, I'm sure we've all had a crush on someone, or lusted after one or two (dozen) people. But one does stand out for me. His name was Gene S. I won't put the last name, as you'll all just Gooooogle it anyways.

Gene was one of the only guys younger than myself that I had a crush on. My tendencies in men still skew older than me. Go figure. Granted, he was only a year behind me in school, but I was completely unaware of him at all until my senior year.

Gene sat next to me in typing class. His almost feathered blond hair (hey, it was 1980-81) probably wouldn't have looked good on anyone else.

While we had little interaction in class, I was acutely aware of him and how he carried himself. It turns out he was a varsity athlete - and had I been into sports at all, I might have known this. His sport was soccer. Remember, this was the 80's when no one really played soccer, so yeah, he was a varsity guy, but for a sport no one went to watch.

I went to watch. I wasn't quite a stalker, but I was a photographer on the yearbook my senior year. I "volunteered" to take pictures at a soccer game. Not surprisingly, most any picture I took had Gene in the shot. Ok - so maybe it was a little "Son of My Sister Sam" (double points if you get that double reference), but only just a little.

It was all harmless and it never went anywhere. Even in my own mind.

Two years later, I ran into him on the campus of Ohio State. He had just transferred there and we walked and talked for a bit, as we made our way to south campus (even though I had no need to walk that way). Really the first true conversation I had with him. It was during this walk I found out his "accent".

On the walk I was on his left side. In class I was always on his right. Had I ever truly seen him from the other angle, I would have figured it out much much earlier. He wore a hearing aid. It wasn't an accent as much as he was deaf and struggled with speech.

It turns out, not only was he one of my first crushes, he was definitely my first differently-able crush.

Song by: Jennifer Paige
Posted by Blobby at 6:30 AM

my sister sam - I used to watch that show. a stalker killed the sister; such a shame.

what do I win with the points?