Dance with the Tiger 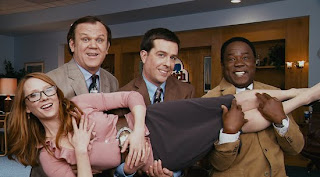 I know we are two months / two movies behind, but generally in the first quarter of the year movies tend to suck more than the rest of the year.

Studios tend to put out the trash at this time knowing people are still taking in the art-house stuff that the Oscars are filled of. C'mon - you know that's when you went to see The King's Speech and Black Swan. Admit it.

So our goal is still 12 movies in 12 months - and ones without Ashton Kutcher (sp), Adam Sandler, a Johnny Depp lizard or anything partially based on Little Red Riding Hood. Seriously.

What is a boy to do?

We went to see Cedar Rapids (seriously, the movie is so low budget, it doesn't even look like it has its own url) last Saturday afternoon. I still want to see Blue Valentine, but I wasn't in the mood for a 'down' movie.

Yes, it looks and feels low budget, and it is. But it's a cute, if somewhat predictable, movie. It's kind of Glenngary Glen Ross meets Superbad.

Ed Helms is most every character ever played by Ed Helms. He does what he did in The Office or partially in the Hangover. He's naive, he's goofy, he's likable, he sings.

The dad from That '70s Show is the same character he's always played too. No stretch.

I will say, I really liked John C. Reilly. He's normally always good. Funnier than he was in The Hours {it's a joke, people}. He's even better when Will Farrell isn't around. And I do believe this might be the first thing I ever actually seen Anne Heche in. She was actually pretty good. Or I can say, I liked her.

And Sigourney Weaver. Is she ever bad, even in when it's a bad movie (Ghostbusters II notwithstanding)?

Of course the girl who played Maeby Fünke on Arrested Development (one of my favourite shows ever!). She was good too, but I tell ya, something about even comically smoking crack makes me uncomfortable.

Cedar Rapids was a good diversion for a few hours though. I needed that. And it is a bit under the radar, which I normally like too. I think the theater only had about 25-30 folks in it.

It is not going to win any awards, but it is better than most anything else currently out there - unless you are dying to see Mars Needs Moms. Ugh!

Oh - and previews. I think there was one decent looking film with Ewan McGregor and then OMFG - a remake of Arthur. It looks positively shiteous. Actually, that is too nice of a word for it. I picked out one or three lines that are lifted right from the original - as if you are going to remake that any better.

Rarely (ever? )has a remake of a good movie made it any better. Hell, remakes of bad movies rarely (ever?) improve upon the original.

Song by: Rosanne Cash
Posted by Blobby at 5:36 AM

First of all I loved Black Swan and The King's Soeech. I would love to see Little Red Riding Hood. It looks like it is goign to be a thriller. But for the most part all of the other movies do look like the suck.

Hope you have a wonderful day today.
Hugs
Ray

I fear remakes and sequels are all that's left.

I'm looking forward to the big screen adaptation of "The Stand".

I enjoyed Cedar Rapids as well. It's not going to win any awards, but it was a pleasant enough diversion with some nice performances - and Sigourney Weaver is still fabulous!

The Ewan McGregor promo with Christopher Plummer playing his gay dad looks great. However, the Arthur remake makes my skin crawl. I just have to scream, "WHY?????" Dudley Moore will always be "Arthur" to me.