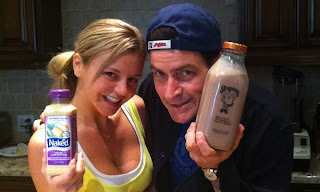 Man - who does not like a good car accident?

You can say you're not interested and that you don't even like or care about Charlie Sheen. When has that ever stopped anyone from gawking at a white hot mess?

I'm not even pretending to say "it's so bad, yet I can't look away". Hell, I'm not sure I even want to. As Charlie himself would say: "Bring it!" (well, the Soup says he says it, so it must be true.)

Granted, the last thing I saw Sheen in was Major League - which I have to say I thought was funny, but my movie dates, Jon and Jannelle, did not find funny at all, but then they didn't even know what baseball was either, so.......

Speaking of - that movie team was the Cleveland Indians. People loved or hated that fact - and I'm just talking about here in Cleveland. The Tribe has had enough indignities over the last few seasons, do they need another with Sheen wearing a Cleveland Indian cap? Seriously, embiggen (it's a perfectly kromulent word!) the title image. He's wearing a fucking Cleveland Indians hat. Ugh!

Truth be told, I have seen maybe two and half minutes of his shiteous sitcom, where it seems he plays himself.......without the crack. For what little I saw, the hookers seemed to be plentiful during this prime time show.

So here's my thoughts about Mr. Sheen - since you can't turn on the tv or open a newspaper without seeing or hearing him: Whack-a-doodle!!!!

Ok, not horribly original, still he makes Matt Lauer and Tom Cruise's conversation a few years back seem downright normal. But I see no good ending to this - except the cancellation of that show.

Death would seem preferable outcome (what? too harsh?) for this to completely end. But of course it wouldn't - since someone would then make him a martyr/saint - like "they" did Michael Jackson. And while this story seemingly has gone on forever, it's a blip in time - imagine how much longer it would go on post-mortem?

Until then, there is certainly no shortage of mockery on the web. Like the LA Times and their top 25 quotes of Sheen in just the first week of explaining how awesome he is!

I don't watch Ellen, but this clip has been making the rounds and it's good to see Jon Cryer have a good sense of humour about the entire thing.

Song by: Sarah McLachlan
Posted by Blobby at 6:49 AM

Greg and I had noticed him wearing the Indians cap thru this train wreck too. On the one hand, I'm glad to see Chief Wahoo getting some exposure, but on the other hand I'm sorry Chief Wahoo is associated with this disaster.

Can we have a national "Ignore Charlie Sheen Day" next week?

I've never watched the show, but it's true, I can't look away. This morning I read he's broken a guiness record. Another thing to bloat his ego.

This is the kind of brain washing that famous people that live in Hollywood endure. Only they don’t say “your neighbor is the devil” – they say “you are so great and special”.

LA is a poisonous place for celebrities to live. Especially ones don’t build a good support system around them. Charlie is the latest example.

I am purposely dodging anything about Mr. Sheen.
He sounds too much like work.

I'm telling you... watching Sheen self-destruct is like watching that washing machine on spin cycle that the dude tosses a brick into.