The Well and the Lighthouse

I call it 'bullshit'. 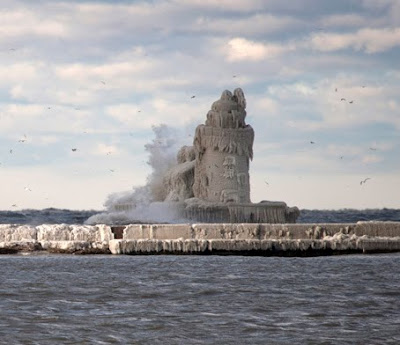 Waves from Lake Erie crashing onto the Cleveland Harbor West Pierhead Lighthouse have made it one big frozen structure - like my big fat body.

Ok, maybe I'm exaggerating a bit, but I'm continually cold: at home. at the office. at the gym. in everywhere between all of these places. ...and it's not even winter. Technically.

The snow never came, but the cold has come and stayed. We hit 31 degrees yesterday - the highest it's been in over two weeks. And oddly enough, it felt colder than when it was 13. Go figure.

Yet once again, I can't warm up. I firmly believe it's an age thing. The older I get, the less I tolerate the cold. As much as I love Montreal, I look at Tornwordo's blog and think - man, he has it way worse. He's even crying "uncle" to the weather, and we both still have at least four more months to go.

Song by: Arcade Fire
Posted by Blobby at 6:26 AM

I started getting cold all the time, when others were saying it was not. At a friend's suggestion, I had a blood test for thyroid. Now I'm taking Synthroid, and I'm no longer cold. Maybe it's time...

dude, I don't even want to hear it.

We haven't cracked mid-teens in WEEKS. Pretty much for all of December.

And we've woken up to below zero temps.

I cannot wait to get out of here for a few weeks. Leaving tomorrow and even though it's supposed to rain for the next 7 days at the destination, I don't care because if it's raining it's not below freezing!

Maybe you are going through malopause. You do have 4 sisters. Perhaps you should gain a few pounds to insulate yourself just a tich this winter.