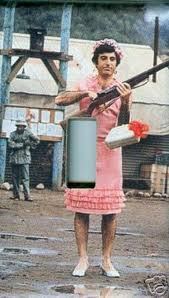 This being a gay-ish blog, I believe I'm legally obligated to blog about the repeal of Don't Ask, Don't Tell. (I'm doubt I'll make many friends here.)

If I don't, I think my blog goes away. Maybe now Daniel Choi will too.

Yes, I'm not a Dan Choi fan. Sue me. He's seems way more self-serving than he is/was for DADT. He went to West Point after DADT was enacted. He knew what military he was getting into. His condemnation is unconvincing.

He never chained himself to Bush's White House fence demanding its repeal. Or performed a half-hearted hunger strike when W was in office. David Blaine did better at that ditty for one of his "illusions". Spare me.

...and for the record, he didn't do any of those things alone or on his own, he just became a face for it, for whatever reason.

And for all these queers hissing for years about DADT, they better all enlist too. But no, they won't - they just wanted the "ability" to serve - you know, "for the future of the gay community". But 99.99 (repeating)% have zero intention of going to their recruiting office or to pick up a gun and serve their country. It's the "ability" to serve they'll claim as their win - just as long as someone else does the actual fighting.

I'd almost bet $10 that Choi doesn't re-enlist either.

I've made no secret that I don't care that much about DADT. There are bigger gay rights to be had. And in the bigger scheme of things, there are bigger political victories needed that are non-gay related. The economy still sucks, as does education and healthcare.

Sorry, but if the gays are truly 10% of the U.S. population, aren't we being a little short-sighted by only looking at our needs and wants. Yes, no one else is going to do it, but DADT and same-sex marriage have seemingly been our sole focus.

Personally, I would rather have the economy to recover so I can retire at some point. I'd like to see more than 40% of 12th graders be able to pass a 6th grade reading test. People bitch (myself included) about who is currently running the country, and how - but just wait.

I get that there are hate groups out against us and anything "we" want, and DADT is one of them. So yeah, great - DADT has been repealed. Now what?

Ok, enough of my high horse. I'm even tired of it. But coincidentally, one of our local rags had this little sub-sub headline. The one right under Mr. Brisket. Really, click to enlarge. 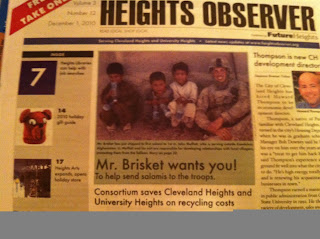 Now, thanks to Joseph Lieberman & Co, Mr. Brisket is getting his wish.

Our gay civil rights are not an all-or-nothing proposition. They are like a bundle of sticks, and DADT repeal is just one of the sticks. And every little stick we get adds up.

Bobby I say Amen to the preacher. You said a mouth full. Faithfully and true. Since I am at the last point of the baby boomers. I want and would like to see some of my socail security checks. I do not think people younger than me have a clue what is fixing to happen to them. I am greatful I have a 401k as well. May I can have my medication and dog/cat food to eat as well. I know tha tis scarry to say it like that, but it is true.
I say you blog it the neail right on the head.

Keep up the GREAT and wonderful work.

Dan Choi aside (I agree..I think he's just another media whore)..I agree with Cubby. This is a step towards getting those "bigger gay rights". It's not about all of us gays and lesbians mincing and prancing to the recruitment office, it's about the end of discrimination.

As one of your heterosexual fans I feel particularly qualified to respond to your post not just because I have had Mr. Briskets salami but I also took sociology at Northwestern with Moskos who wrote "don't ask, don't tell." LIke Cubby points out society is evolving toward equality, not kicking and screaming but in a self congratulatory way. But it is moving. Amen.

Absolutely no excuse, ever, for gays to be denied the ability to join their very own country's military. Ever. I don't care if it's the biggest issue, or if there are a whole pile of bigger issues, this was worth fighting for and should have never been enacted in the first place. There is never an excuse for anyone being required to hide who they are. Yes, he's self serving. So what. I'm very glad that I lived on this day in our nation's history.

P.S...I will not be sharing your post with my very close friend who has been in the military for 15 years. And has been hiding his identity for all of that time. Yeah yeah, sure he knew about it ahead of time. I'm not sure that makes it right. And I won't tell you about his partner...and the therapy, the pain, and the suffering they have gone through.

I concur many want the right but not the task.

"it's not the power I feel deprived of, it's the mention I miss." goes the line.