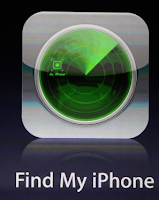 It isn't coming back. Ever.

Wouldn't you know it - that about four days after losing it, Apple came out with a free version of Find My iPhone via MobileMe.

If you don't know about it, even in vibration setting, it can send out an audible signal for someone to hear it. You can also locate it by logging on to the internets and it will GPS it to tell you where it is. Even better - you can wipe out all the information on the phone so no one can access it at all.

Yes, this feature was available via MobileMe, at the cost of $99 a year. And yes, I'm as cheap as they come, so I didn't get purchase it initially. Obviously.

So now I have a new iPhone and the freebie of MobileMe. I've also put a security code on my phone, so I have to sign into it all the time now, which isn't such a pain, but it also means that anyone who gets a hold of it without permission can't get into it either.

I'm still bummed about some of the NYC and DC pics that were lost, especially the one I had taken of Denton at the W. Honestly, it was the bestest one I had ever taken in 2.5 decades. (no, I do not have any wedding pictures to post yet.......you'll know when I know.)

Yes, I have it still in my mind, but like my iPhone, I will eventually lose that too.


Song by: the Magic Numbers
Posted by Blobby at 6:00 AM

Email ThisBlogThis!Share to TwitterShare to FacebookShare to Pinterest
Labels: iPhone

I have a security code on mine too -- and I'm on my way right this very second to get the Find My iPhone thingy mcbobber.

I am sorry to hear about your I-Phone. Hopefully you can call it and someone may answer it and return it to you.

This may sound silly, and you may give me a virtual slap for it, but maybe next time you guys go to DC you can reenact a few bits and get more pics. It's better than nothing, isn't it?

This is one of the reasons I hesitate to get one; I just know I will loose it within a week.

This always makes me wary of attachment. The misery of loss. Hopefully Apple would have some kind of limit on the number of times you could enter a failed password. 9999 minus 100 is definitely doable.