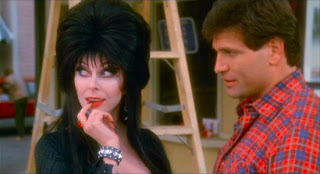 Meredity almost blew my now, not opening line to my blog entry today. She's effectively made herself the first part of the entry.

So, back in the day (yes, THE day), there was a movie called, Elvira: Mistress of the Dark. A so-so movie at best. However, it contained two lines that have stuck with me and my friends for what I'm guessing is almost two decades.

I'll set up the scene for you:

Elvira is walking down the street and a letter on a cinema marquee falls and hits her squarely on the noggin.

“How’s your head?”
”Well I haven’t had any complaints yet.”

Anymore, I have to bite my lip whenever anyone asks me that question.

That is if I remember to bite said lip. More often than not, the response Elvira gives just passes my lips and onto the unsuspecting person who asked a question in complete sincerity.

Normally, I say "No complaints yet!". So I guess I paraphrase.

So, knowingly and tauntingly, Dith asks me this question yesterday on Facebook - and I just couldn't do it. Mostly because, it would have ruined this blog entry, and I cannot have that.

Yes, I did have my doc appointment yesterday regarding the boo-boo on my head (speaking of Boo Boo - really? Yogi Bear as a movie??? REALLY?). I wasn't sure what to expect. Not exactly.

As promised, I took pictures. You knew I would.

I swear the iPhone is the bloggers best friend. I've gotten more use out of the embedded camera than all my other SLRs, digital cameras or Kodak Instamatics combined. 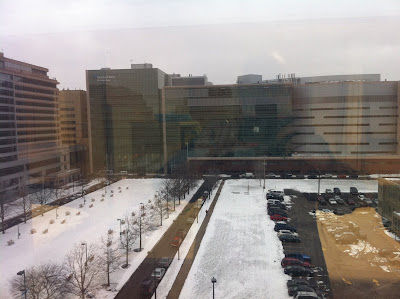 A pic out my 6th floor exam room. I'm in the A building looking over at the new Glickman Urological Institute. I'm sure some day I'll end up there too. To the left is an Intercontinental Hotel. There are two of them on the medical campus.

Not only did he arrive 30 minutes after the resident, he didn't seem to care and/or could be bothered. He wasn't listening to me and about how long the "crop circles" had been there (both the nurse and resident laughed at that one), and trust me, I was explaining it clearly. He was going with his own agenda.

When he did talk, it was to the staff, not necessarily to me. He also clearly didn't know what was going on up there. He kept saying it was an inflamed hair follicle possibly - though I had to tell him three times that no hair had EVER grown in those spaces.

So he had the resident do two things: wound debridement and then unbeknownst, to me, biopsy part of the area.

Oh oh oh....before that, they got the digital camera out and took pictures of my head (should I have called this post 'My Humps'?). I could have just said I'd send them via my iPhone, but didn't. Once again, the nurse and resident laughed when I said 'now, no posting those on Facebook, ok?'.

So, I took a few shots to the head to numb me up. Then they cleaned me up, cut me up and then cleaned me up again. I'll get "results" back in a week or so. Here is my guess: the results are they needed to do a procedure to bill for and that there is nothing wrong with me.

I ask him about wound care and, honest to g-d, as the door is shutting, he almost gets out, "the nurse will tell you".

PRICK. (don't think I won't be saying something.) 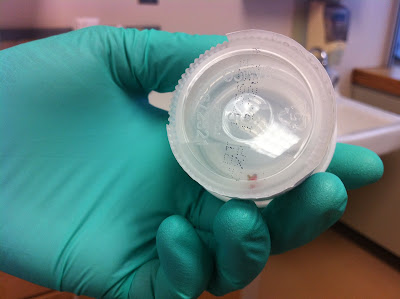 The nurse was great. "Do you want to see it?, she axed. I said, "ooh, do you mind if I take a picture?". She held it for me so I could. Gotta love that. The little piece in there seems way little, but I guess I shouldn't complain they didn't scalp me. 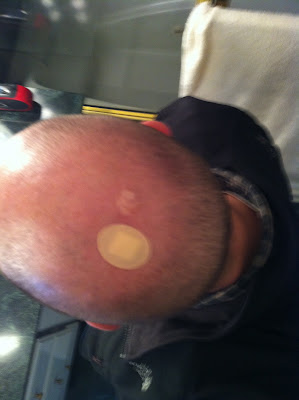 For the next week, I have to keep the wound moist with neosporin and then cover it with the world's smallest yarmulke.

It should make for interesting conversation at the gym, if nothing else. 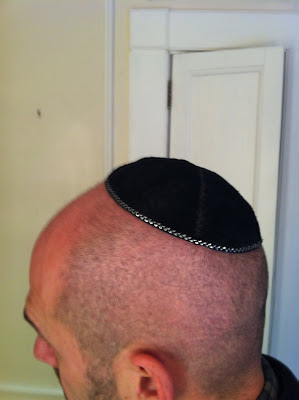 Of course, by saying the above, I immediately thought of how I should cover it and thought of really just wearing a yarmulke for a week. Not the bar mitzvah bling one, seen here. We all know I won't, but I do rock it - and I got that shaped head that doesn't need bobby-pins (or blobby-pins) to stay on. Not that they'd have anything to grab on to, mind you.

However, since some of the comments the other day about scalp wounds being painful were somewhat correct (not horrible, but I have a high tolerance for surgical and medical procedure pain anymore), I am dying for someone......anyone....to ask me how my head is.

Doctors like that piss me off to no end. I like the fancy yarmulke! I've never worn one, so I have no idea if/how it would stay on my head...I'll have to try that out sometime. :-)

Well now, if that isn't the world's greatest Christmas gift. Here's raising a drink to you....for better days ahead! And fewer prickish doctors.

That is funny, I have been waiting to use the phrase "I have warts on my dick older than you are" when I am at the doctor.

and you ROCK a yarmulke!

Yikes! Is it throbbing?