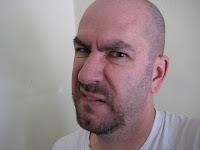 Oh, don't judge! The picture was taken almost three years ago. At least notice that you can see I have no full beard, not that I guess I couldn't have shaved in the last few days. ....but I didn't.

See, the post title? I needed an image to go along with it. ...and yes, I truly do own a cd from a group called the Four Bitchin' Babes. They are folksy but became more kitsch than anything else and except for Sally Fingerett (yes, her real name), there has been no other constant member. One Bitchin' Babe and a continual rotation of Three Bitchin' Temps.

But once again, I'm off topic. 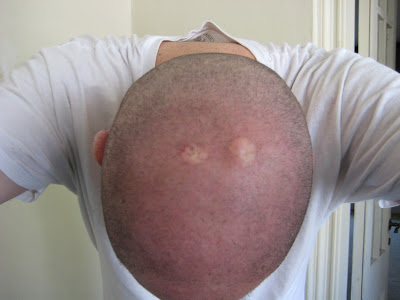 I've had those two bumps since birth. There has never been any hair on them and they always lacked any feeling when touched. And since kids can be cruel, growing up, like when I was in 3rd, 6th, 10th grades, etc, I was tormented for "going/being bald", I just threw it in their face that it was due to being hit by a car.

I mean, I was hit by a car when I was about four (a total other story), but the scar tissue (which is what it is), is not from that. But it did shut those kids up. I guess by 8th grade I was taller than most kids, so most only saw it when I was sitting down and they were not.

Of course the joke was kind of on me, because I would be going bald, however I don't think those kids I went to school with were all that clairvoyant. 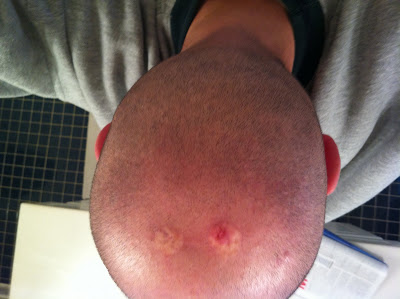 In the past few weeks one of my "bumps" has been raised. Noticeably so by myself and the husband. Though I can't see it unattended, I'm sure that in proportion, it is just like Everest!!!

No, I did not rake the clippers across it. Though I had no feeling in the bumps, they do make for an irregularly shaped head (shut up!), so I have always very cautious about just dragging stuff across them and usually protect the area with my fingers.

Now, the almost the slightest touch will get them to bleed. It's like I have a stigmata on my noggin. Maybe I can be canonized. Everyone else is having it done!

So it has become enough for me that I have made an appointment with dermatologist about this. I wasn't sure quite who to consult on the matter, and I figured, if he couldn't help me, than the time wouldn't be completely wasted: I'd have him look at that persistent thumb-wart and get a second opinion....or third.

I'm getting tired of drying myself off after a shower and finding a towel with streaks of blood on it. Blech. Ruckiry (not Jon's boss), usually they are gym towels, so I don't have to worry about getting the stains out.

So in a week or so, I'll know what the deal is. Maybe they'll slice it down the middle, pull it together, fixing the issue and giving me a brow-lift in the process, that I so desperately need. Score!


Song by: Four Bitchin' Babes
Posted by Blobby at 4:58 AM

Email ThisBlogThis!Share to TwitterShare to FacebookShare to Pinterest
Labels: Health, Me

I can't wait to hear what they say. The suspense is killing me.
However, I think you should play up the stigmata thing. I'd love to see a mob of people gathered at your door, paying homage (as if they don't already)...provided they stay the hell off your lawn!!! ;-)

If you are trying to shock your readers, it worked.

Maybe you should set up a video camera and give it a good squeeze. If nothing else you'll get some YouTube fame out of it, and isn't that what we all want, really?

I'll refrain from telling you the horror story about one of my employees who had a lifelong bump on her head that suddenly started acting up. She had it removed and she spent the next three days at work with tears coming down her face it hurt so bad. Yeah, it's better if I don't mention that.

Scalp wounds suck. The sooner you see a doctor, the better.

Oh...maybe it's an eyeball or a tooth from that unborn evil twin your body absorbed in the womb! He's finally emerging...like a cicada from a shell.

@Larry - I do like to shock the readership just a little. It keeps them on their toes. ..and when it bleeds, I have squeezed...as gross as that sounds. All it get is more blood.

@John - I agree, people should pay more homage to me!

I worship you, o holy one! (bows down in supplication)

good to hear you are seeing a doctor about this, though...as a cancer survivor, one can never be too cautious.

I hate to second Cubby, but scalp wounds are the worst. I had mine ripped clear open by a great dane when I was a kid. They sewed me back up, but I'll never forget how much (and how long) it hurt after that! Hope it's minor and nothing to worry about.

You're certain they're not the other two thirds of triplets? I've seen things like that on Ripley's Believe It or Not...

But seriously, I hope the dermatologist finds nothing wrong.

Please do not judge the picture with the help of the right and objective sign of the individuals. The potential of the___14 personalities his been shared for all ideal and perfect teems for the students.