We had my little sister's kids on Saturday day and over night. They've been asking to stay over for longer than a year. We've just been successful at putting them off for this long.

Sure I like my nieces and nephews, but how do I say this kindly - I don't like kids. They are both needy and yet don't really know what they want (or want to do) nor know how to articulate it well enough.

Yes, I guess this is not their problem, but I freely admit that I don't deal with it well. And they're messy. It turns out, I'm more nit picky than I fully realize. Food half-eaten and left around, or coats on the ground or/and TVs turned on and they've left the room - for good.

The idea was to wear them out. We failed.

There is this winter wonderland down at Jacob's Field (home field of the Cleveland Indians). Since no one attended during the actual baseball season, the administration was trying the money maker of doing tubing, skating, mazes and a snow making machine - a family day out.

That is, if the family you belong to is one for whom Mitch McConnell is trying to keep your tax breaks. The price to get in and actually participate in these events is astronomical. Had I known before hand, I would have taken the kids to see Saw 7 instead - and they're all under 10 years old!

The older kids liked the tubing. Uncle Blobby did not. 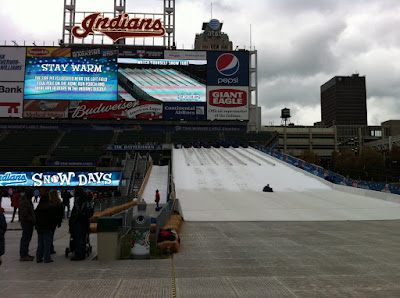 I did not feel in control. As it turns out, I don't like being out of control. Note my earlier comments on not being able to control how kids act or do. 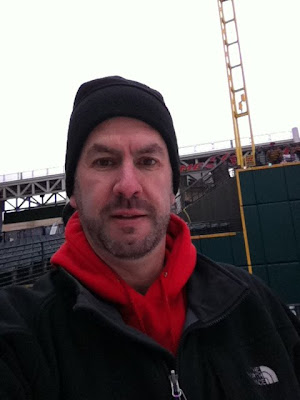 Yeah, this picture doesn't really show me skating, but Denton did take video of it, but I ain't posting it here. Sorry.

I think I was like 19 the last time I skated on ice. Ruckiry (not Jon's boss), I called upon my long-ago rollerblading skills and made it around the alleged "mile-long" course a number of times. I was slowed down by my ever-trailing 10 year old niece. Bother!

The ticketing here was incredibly bad too. Instead of just doing it in two-hour segments from the time you purchased, they were just two-hour segments: 2p-4p, 4p-6p etc. So if you got there at 2:30p, you still had to leave at 4p, but pay the frickin' full price. What a rip.

The kids were probably ready to go. They were cold. It was cold. But I would have liked to skate for another hour or so.

I think maybe for another distraction for us, Denton and I will just do open skating at one of our ice rinks that are around Cleveland. It's new to us, we've never done it - at least together. It was how my parents met over 54 years ago. They still have dinner once a year with their skating club - though clearly, those numbers are dwindling each and every year.

Still my mom will be thrilled that her youngest granddaughter went skating. I might even get points for taking her. I said: might!

Song by: Kathleen Edwards
Posted by Blobby at 6:33 AM

I am sitting here grinning. "I did not feel in control." Welcome to parenting! There is no such thing as control. "Best we can hope for" is the top of that mountain.

You have to pick your fights. Will it be cleanliness or manners or whining? Pick one; the rest have to wait for another day.

When we were in Cleveland for T-Day they were advertising the crap out of the Winter Wonderland down at the Jake on all the TV stations. It sure looked fun on TV. Sorry it was so disappointing in person. As they say, anything to make a buck.

I agree about kids. They smell and are hard to train. Puppies are much better.