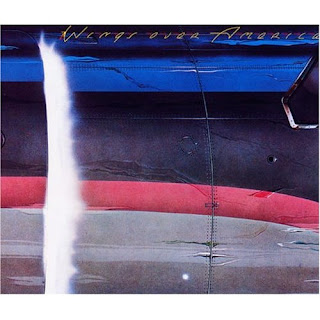 What do you call a dog with wings? Well - Linda McCartney, of course!

Oh, the joke never gets old.


Anyhoo, I owned Wings Over America when it came out in December 1976. I actually got it the same day my parents got their first microwave oven. How's that for dating oneself?

While I was a big Beatles fan, this was the first Paul McCartney disk I ever owned, which was quite odd when you come to think of it - I had none of his other records, but would go out and purchase a 3-disk live set?

McCartney became a fairly cheesy songwriter as time went on. His schmaltz just outweighed any good he had done in his lifetime. But what's odd is that even some of the sap sounds not so bad in a live setting - at least back in '76.

I will also say, that had it been cut down to a 2-disk set, it probably would have been that much much better. I'd have cut "Silly Love Songs" (always!), "Listen to What the Man Said" and "Let Him In" - and you know, even take out some of the Beatles tunes too.

That would have left you with mostly Wings stuff that played better live than it did on record, and a few songs by Jimmy McCullough and Denney Laine.

Laine had what I consider the best outing here, with "Time to Hide". Yes, I see the irony in a live McCartney disk and the best song not being his. It's just my opinion......even if it happens to be the truth.

The first side of the disk one (on the Lp) is only four songs long, but it is done fairly well and segues very nicely, especially "Venus and Mars/Rock Show/Jet". Yes, they play them as almost one song and it really works. I do like "Spirits of Ancient Egypt" too.

As for the non-Wings/Beatles songs, I really do like "Richard Cory", which always confounded me that it got a songwriting credit when it was basically plagiarised from an Edward Arlington Robinson poem from almost a century earlier. Still, I like the song along with "Picasso's Last Words (Drink to Me)".

For a live disk, I have to say, I like it. I'm not a fan of the genre. I'm not a fan of McCartney - the solo man and/or his group, but the production values kind of come in line with this disk. Of course, the band pretty much drowns out most of Linda's vocals, so that's not a bad thing.

I don't know I'd ever bother to convert it to compact disk or a digital download, but now and again, if I come across one of the songs being played, I go back to being 13 and enjoying playing the disk.
Posted by Blobby at 5:02 AM

Mr. Macarthy seems to have become a bit cheap over the years.