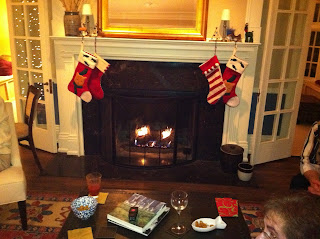 It's always fun to do a post-mortem on the holidays, no? Ok, maybe 'fun' isn't the operative word. It's probably not 'interesting' either. But it is a blog post and you know I am about those.

Everyone showed. Plus one.

I got a call from my mother saying she invited her brother to attend. That was fine with me, I like Uncle Tom - not so much his cabin. With Tom being there, that made two nonagenarians in our house. (yes, I had to look that up. I assumed a 90 year old would be a neuftagenarian, but I was wrong.)

Tom and his wife used to attend our holidays, but after his she died 15 years ago, he no longer spent this time with us. This year was different and my mother called to tell me she asked him - thinking I'd mind. We loved having him. Like my father (also 90), they both still drive, so that worried me - and don't even get me started on that subject.

Everyone was well behaved. No talk of politics, or even religion really. The kids were well behaved, but that is why we put the GameCube and a DVD player on the third floor. They really might have been ill behaved, but we didn't have to hear them.

As you can see by the title image, we still have four stockings. If you enlarge the image, you'll see the two on each end have cats on them. Even though we only have one cat, I couldn't not hang Tovah's stocking. And of course, we had a fire going. 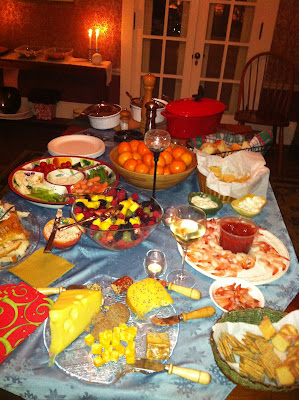 Here is the spread. Or most of it. Gluttony was mentioned. That might have been extreme. Mostly appetizers as I mentioned yesterday. I did like my centerpiece of the bowl of clementines. When you put them on display like that, it almost seems weird that I eat that many per week.

My mother did the unthinkable. For as long as I can remember (and I am old!) we had tenderloin on this day, whether made at her house or ours. This year? Beef Stroganoff.

It's not that I don't like it, but you serve it with rice or noodles and years ago we made this a non-sit down meal. Stroganoff is a sit down meal. The same argument could be made regarding tenderloin, but if you slice it right and have bread for sandwiches....you're golden. Plus we don't have a table to seat 17 folks.

I'm sure there is a better way, but we had leftovers. Not tons, but I sent stuff home with many of my sisters. But what flew off the table last year (my beautiful fruit salad), almost went untouched this year. What gives?

People arrived at 17:00 and we had cleaned up and were in bed by about 22:45. Exhausted. Sophie was dead to the world. Too much excitement for her. 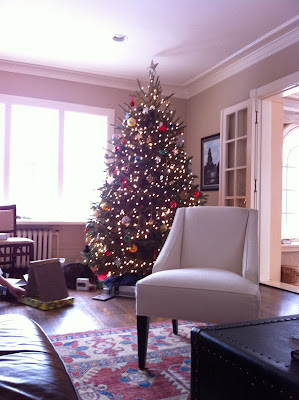 This is the living room the next morning. Maybe afternoon. Since we are two grown "adult" men, we don't have to open gifts as soon as we get up. We do breakfast, read the paper, etc. Eventually we get around to presents.

It was a nice exchange, but nothing over the top. Kind of. One big present each and a few smaller ones. As much as Denton loved the Kindle, I think the better one to be the Lego Falling Water I got him. He's an architect geek, so I'm hoping he'll like it....and actually build it.

In the foreground you'll see a little tent that is for Sophie - she can go in it and scratch it too - not that she has front claws. As expected, she isn't bothering with it much - but it came with catnip, so maybe we'll sprinkle that on there and see what happens. 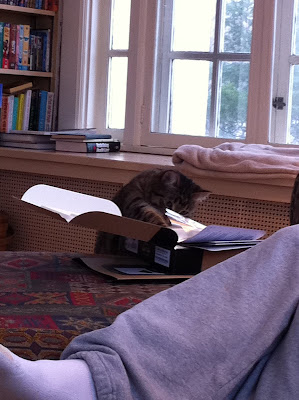 Speaking of Princess Sophie, here she is being more interested in the Kindle box than her own gift. Typical cat behaviour.

It was a great lazy day. We never left the house. I couldn't bring myself to make my spicy tomato soup yet. There's enough food here for the next few days, but I'll get around to it. I also didn't get to make my puff pastry appetizer either. There was way too much food to add another item.

Maybe we'll invite some friends over early in the week and I can make both of those. It will be a light meal and we certainly have enough wine to wash it down with - and beer. Not one person had a beer, just wine and hard liquor. (Morty - come quick, I need your help getting rid of it!)

I hope you all enjoyed your day. I'd say it's back to the grind, but I'm working very lightly this upcoming week. I hope you're doing the same.

Song by: the Beatles
Posted by Blobby at 5:26 AM

Glad to hear you had a lovely time.

We have Christmas Tree ornaments for each of the Greyhounds, both past and current. We hang them all on the tree every year.

The Lego Falling Water set is EXTREMELY cool!!! OMG! Make sure you take lots of pics of it when he builds it.

Speaking of pics... still no wedding pics? Is it time to go kick the photographer's ass?

While I will be traveling the next three days, I can't slow down work until February. I might be able to take a breath next week for a couple of days, but I have ten workshops, four worship bulletins, newsletter columns for the next seven weeks, a training seminar, and an Epiphany Parade to execute in the next three weeks.

But! My boss has realized my worth and successfully campaigned to reinstate my pay that I lost a year ago. It ain't much, but it's more.

lovely home! have a great week!

I thought the same thing - your house looks holiday-perfect in these photos!