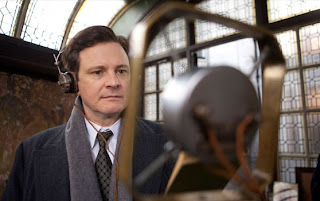 We are still not going to make the movie goal, but we did capture another one yesterday.

The King's Speech is possibly the best movie we've seen this year. Or is the case with me. I know Toy Story 3 is getting the sentimental favourite 2010 flick from most everyone - but overall, I'm not that sentimental.

I've always admired Colin Firth since seeing him back in the late '80's in Apartment Zero (though to be fair, that was more lust for Hart Bochner). And while he has worked steadily, for each great movie he's been in, he's waded through a lot of crap (Nanny McPhee anyone? Any of the Bridget Jones crud? ...just to name a few).

Based on a true story, with some artistic embellishment, The King's Speech tells the tale of the future and then present King George VI's speech impediment. That's all you need to know. Actually, there isn't much else to it, except some exceptional acting from the entire cast - especially Geoffrey Rush. Oh, and Colin Firth.

...and apparently, Buckingham Palace is like Hogwarts South. Dumbledore, Bellatrix LeStrange and Peter Pettigrew all make appearances. You'd think there are only 12 actors in the UK.

The screenplay is good, the acting is good, the locations, music and filming are very well done. I could easily see Rush and Firth snag awards for their work.

Black Swan update too: I totally would have enjoyed Black Swan way way more - and had a greater understanding of it - had I known the story of Swan Lake. While still on the psychotic side, it would have made a lot more sense had I known that. If planning on going and you don't know the Swan Lake story, I suggest wiki'ing it before you go.

Song by: Garth Brooks
Posted by Blobby at 5:01 AM

Greg and I wanted to see this movie on our upcoming double date with another couple down here, but they went and saw it with someone else while we were away for Xma$$. Bitches! Now we'll probably see it alone.

Real men hate Black Swan, and since I'm trying hard to be a real man I'm required to hate it too. Yes I know I risk losing my Big 'Mo accreditation by stating this, but it's true.

After looking at the screencaps of Hart Bocher, Apartment Zero is on my "must watch" list. Sizzling hot!

I loved Firth in "A Single Man." Like Anthony Hopkins, he can convey a great deal in silence. Still on the fence about whether I want to see "Black Swan."

My partner is very keen to see it. I suspect we will do so before the end of the year.