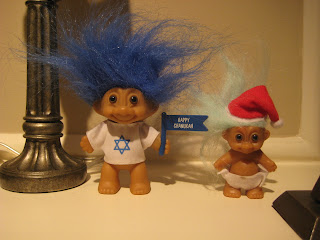 Or Chunukah - as my cousin called it.

He claims he can never spell it correctly, though I'm not sure why. It's not like he hasn't "celebrated" it 40+ times.

But as he's also wrote, "eight days and and at least as many spellings". So true.

...and all you really get are underwear and socks, and not even enough for eight days. Oh, and gelt.

Gelt - some of the worst.chocolate.ever. It's not just milk, it is waxy. And it is no fun to try to peel that gold foil off of the coin. There is probably a niche market out there for gourmet gelt. Maybe I could become a chocolatier and cash in - though you only have a surge in sales for 1/52 of the year. I'm not sure I could retire on that....or even cover my expenses.

I'm sure we still have to do something for my father's upcoming 90th, but his wife (yes, I know - my mother!) doesn't seem all that engaged. I think whether my father is engaged or not is inconsequential. Of course, he could care less if something were done, but it is one of these milestones that we'd all regret if we didn't do it.

So the holiday season has begun. Snow (which started yesterday), party planning, birthdays, Hanukkah, booze - though to be fair, that last item is year-round.

On another note - wedding pictures were allegedly mailed to us yesterday. Maybe, just maybe you'll get to see one.

Tease. You KNOW we're dying for lots of wedding pictures.

and happy festival of lights!