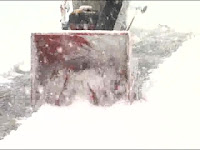 So much for a more mild Winter this year.

Them Farmers in them thar almanac are a bunch of fucking liars, as far as I can tell.

We have our January weather in early December. So maybe, them farmers are right, since technically we are not in Winter. We haven't been higher than 27 degrees in the last week. .....but still........

Just because, I opted to work from home yesterday. It wasn't weather related as much as it was couldn't drag my ass out of bed related. Don't get me wrong, I was out of bed at 06:15, but that's quite a bit later than my normal routine. I think it has to do with working out/going to the gym twice on Tuesdays.

Anyhoo....I was on a conference call and noticed it flurrying around 09:30. No biggie - it has been flurrying for the last week. At least in our neck o'the woods, we have gotten no accumulation. My sister and parents, who are 30 minutes east of us had gotten about 18" of snow in the last few days.

Je wasn't paying that much attention because I wasn't going anywhere, but then around 15:00, I started to notice how the trees were weighed down and branches had started to droop. Then I took a closer look and noticed that about 8" of snow had fallen. .....and it was still coming....and heavily at that.

I went out around 16:00 and decided to use the snow-blower.

It was the first run of the season and yes, me taking my tumble last year was on my mind, but what were my options, really? While I wasn't going anywhere, someone was coming home from work and there was no way Denton could get in the drive with that much snow. Oh - the reason he couldn't was because I didn't estimate the snowfall very well.....we were over a foot of snow, not a mere 8".

There's a sex joke in that last sentence waiting to be written, but I like a little more of a challenge when it comes to humour.

So, I fired the snow-blower up and did the drive, but before I was done, more than another half an inch fell. No sense of accomplishment. But I didn't fall and end up back in PT.

I guess it was lucky I didn't go to the office. The normal 15 minute ride was clocking in at 2-3 hours on the way home, according to the news. I navigated Denton home through many side streets that he made his 30 minute drive in a little over an hour.

And as of this writing, it is still snowing. But I guess it could be worse - I don't live out near my sister. 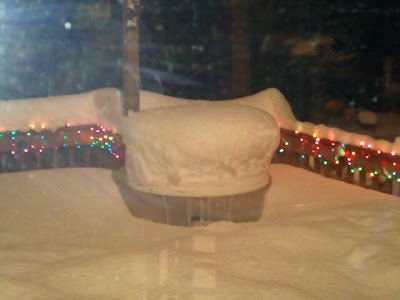 I really feel bad for their dogs. I'm not sure how those 15" and under dogs can make it on the deck to go pee and poop.

3 more inches of snow and having those holiday lights up are going to seem silly that they took the time to up them up in the first place.

I might be working from home again today....I'm definitely skipping workout.

I don't miss this one bit. If we ever move back to Cleveland we'll get a place on the west side.

"...but what were my options, really?" I can't believe you don't have a service to clear your drive. What about the guys who do your lawn? Don't they have plow service?

OK - I'm going to stop complaining about the cold weather we've been having. At least it's just cold. You don't have to shovel the cold!

When you have doggie, and mine are little ones, you need to shovel Pee and Poop Paths, these lead to a small clearing so they can complete their mission. I blogged about it last year with pics.

As for the weather, we're in another La Nina so the weather is supposed to be just like last year.

Why did the snow man drop his pants?

He heard the snow blower was coming.

So is this the lake effect snow? It must be if your sister is just a half hour away but got over double what you got. Those bands set up and don't quit. Anyway, I like seeing the misery being spread around. We're in the deep freeze and a foot of snow as well.

First of all, the Farmer's Almanac doesn't take into account the affects of global warming.

Second, we are in our 4th snowstorm of the year, and it isn't even mid december.

And I move in two weeks.