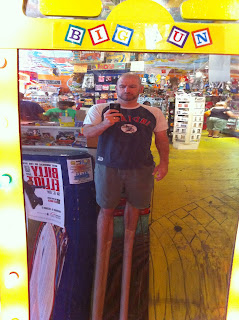 My lord, I do have a song for everything. I have no idea what this song is, but I "own" it. For fuck's sake, I have the extended version. I do know that Tom G gave me the cd way back when - some compilation for 'Retro 80s'. Since he gave it to me in the '90s, were the '80s that retro?

...and yes, I was not wearing shorts and an Indian t-shirt yesterday. While 27 degrees, for some reason it hit me as bone-chilling cold. The pic was taken over the summer and I still had it waiting for use. It also makes me look thinner.

However, I was at Big Fun yesterday.

We had a great holiday treat of Becky and her husband being in town for their holiday, and we got to spend yesterday afternoon with them.

Lunch at Tommy's, which is always great. They have a lot of vegetarian options there. While I am not a vegetarian, Becky and Andrew are. Most other places here, they'd be given the choice of salad or salad. Folks, this is NE Ohio - we are cow and chicken eating people. I like my veggies, but I don't think I could give up eating meat (oh yes - snicker all you'd like at that comment, you pervs!!).

After a nice meal and lots of talk, we went next door to Big Fun. I love the store, but I don't ever really buy anything there. The same cannot be said of Rebecca - she got action figures of Aragorn and Galdalf - now I cannot remember if it was of the White or the Grey. Oh, they had a Frodo, Sam, Gimli and even a Saruman. Alas, there were no Ent, no Fairies and no Lady of the Wood (aka Galadriel). And who wouldn't want an Agent Smith Elrond??

I have no idea what she's going to do with them. Hopefully she'll keep them in the box so they retain their "value".

I looked at their Pee Wee stuff, but I either had most of it already, or the new stuff they had was just that: new. Not vintage. Newly made (and crappily at that) King of Cartoons or Reba the Mail Lady.

After that, it was a bookstore and then up the street for a beer. A cold beer on a colder day.

I could have easily spent all day with them. We rarely get to see Andrew - and we do love him so. Of course we love Becky, but I see and talk to her.

With no offense to my family - getting to see the two of them was the highlight of our holiday. Oh - and seeing this in Big Fun: 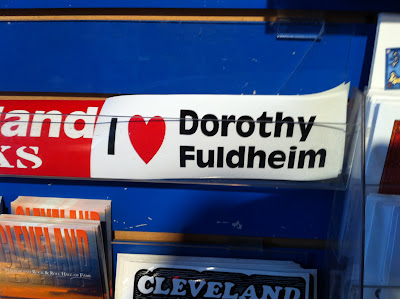 Maybe you have to be from Cleveland to know Dorothy. She was a henna-headed journalist who was (seemingly) ancient when I was young and died well after I became an adult. She was, however, the first, or one of the first, women in journalism to have her own news program.

For as many years (decades?) that I've been coming to Big Fun, I had never seen the sticker. I have to be on the cusp, age-wise, of people who remember her. They young whippersnappers can't possibly know who she is.

....not that I'm putting a bumper sticker of her on my car.

Song by: Inner City
Posted by Blobby at 5:39 AM

I have friends I see once a year, and it isn't nearly enough. How do you catch up on the important things when there's only time to talk about events?

I think it's been about a year and a half since the last time you mentioned Tommy's, and I got all sentimental then as now. I used to love going to that place, and walking up and down Coventry. I suppose it's all different now than it was in the 90s.

@Birdie -- something tells me Blobby is going to be writing about Ralphie's little brother soon...

I'm going to start a petition to get a BIG FUN here in Boston. I feel like I'm missing out!

I think you are HOT; I have seen you videos. Still waiting to see you in your Night pajamas. :-). I am gl ad you wen tout and had fun with your guest. I have that are vegetarians. I know how hard it is to find a place like that.

About you eattting meat. WELL I went there. Still waiting to see you in you night pajamas.