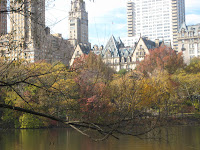 While it took a long time for me believe that John Lennon was actually dead, it remains unfathomable that it has now been 30 years since his killing.

I was a senior in high school, doing homework in my room with the radio on when I heard the news. I went to my parent's bedroom to confirm the news via pre-cable television. Even Monday Night Football broke the game to report the news. There is a little something disturbing to have to hear Howard Cosell say those words.

I had been a huge Beatles fan way back before high school and was in awe of Lennon's work with the group. While I liked his solo work, it didn't resonate with me quite as much. Ditto could be said of most of McCartney's solo stuff too.

I am sure I am in the minority, but I don't really care if I ever hear "Imagine" again. Call me cynical. And don't even get me started on "Happy Xmas (the War is Over)". I'd rather put needles in my ear than have to listen to that song again.

Lennon had way better solo music than either of those songs - though not more popular. "Mind Games", "Whatever Gets You Through the Night" and "Working Class Hero" immediately come to mind.

Still his impact on music and culture was indelible.

I recall shortly after his death having a disagreement with a kid on my bus about how he thought John Bonham's death a few months earlier, had a greater significance in the world of music. As if!

I'm fairly certain, that without the Beatles and John Lennon, there would have been no Led Zeppelin. I took it more as a doofus boy who was more entrenched with what band sounded 'cooler' than any historical precedence.

30 years after the fact, I'm pretty sure Lennon is as big of an influence on kids coming of age as he was back in the day.

...and 30 years later, it is still kind of shocking and heart-breaking how he was gone in an instant.

Assassination? For a guy who played guitar and sang? I guess like a president or Archduke Ferdinand, shooting someone changes the course of history and the world.

Even if the world is music.

Song by: Elton John
Posted by Blobby at 3:29 AM

Funny, I have no recollection of hearing the news, just perplexion about what the big deal was. But then I've never taken music very seriously. It's like a garnish for life is all. (for me)

I always thought Lennon/McCartney was a sum greater than its parts; neither man alone could reach the heights they did together. But yes, Lennon changed the face and direction of music. His death made no sense to anyone but his killer.

I can't say that I remember where I was when he was assassinated, after all, I'm SO much younger than you ;-) but I've always shared the confusion as to why he was targeted. I really never understood it.

I know it's the easy way out, but Tornwordo's comment reflects my thoughts completely.

"beautiful boy" is a fave of mine.

pity we can't take that worthless piece of shit chapman out of prison and shoot him!

yes, one person's death can change so much.

He died when I was 13. I can still remember hearing the news and the world going into slow motion. I cried on the anniversary of his death until I was 21. These days I just keep him in my heart…next to Marc (Bolan).