Claes Oldenburg died a few days back. I was sorry to hear that.
For those who might not know him, he was a sculptor who made mostly ordinary things larger than life in the world of pop art.
Cleveland is lucky enough to have two of his pieces. One a public work........ 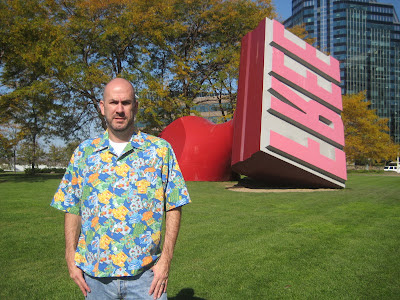 Ahhhh. A pic of me during my Spo Shirt photo shoot back in {gulp) 2010 !
The other piece is in the Cleveland Museum of Art. 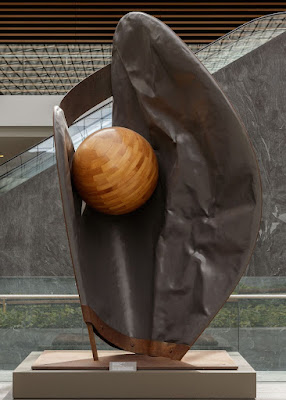 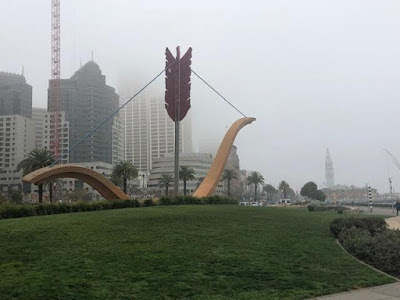 Save for the O'Keefe-ish one, I'd say his style is easy to identify. I've never guessed wrong when surmising art I've happened upon with his flare.
I swear that Cleveland had another piece of his in the '70s. A large hand pistol that sat outside the Justice Center. Huge controversy (sing that last word like Prince) and it was dismantled and taken away. For the life of me, I can find nothing on-line regarding that.
Maybe Cookie will remember something about this.
The man was 93, so he had a long life to bring objects what will last longer than he. I like his work. I like his styled. I almost used past tense, but I still like it. I liked him. Past tense.
Because he's dead.
Song by: the Cure
Posted by Blobby at 12:07 AM

Georgia O'Keefe meets Lance Armstrong? You are very very naughty, and I would like to subscribe to your newsletter.

I have that photo too.
I should work on getting you a our own shirt.