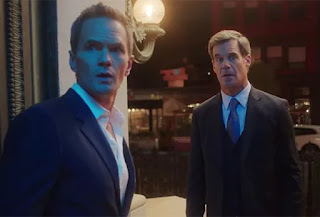 We are making our way though Uncoupled, which is somehow being billed as a "comedy".

It might have some funny moments, but so far those have all been from Marica Gay Harden.

The real quick premise: a half of a gay couple, who had been together 17 years, moves out without notice on his 50th birthday.

Now, I love Tuc Watkins, but I'm thinking he was viewing 50 in the rearview mirror at least five years ago. Neil Patrick Harris plays his former partner.

Darren Star(r), the guy who created Sex and the City, also dreamed this show up as well. But there are only really three guys in this, so, the comparisons only go so far.  There is a scene where the sassy black female bestie breaks her "SJP heel".  So, contractually, Star(r) is still seemingly tied to the former co-lead of Square Pegs.

And yes, there is at least two scenes that is right out of SatC, and even without those, there isn't anything horribly new under the sun on this one. Actually, two episodes may as well have just been paid ads for Grindr.  ......and I'm not even kidding about that.

I'm assuming that since we are two-thirds in, there is no re-coupling. I'm guessing there is also a way that will either end it or set it up for the next eight episodes. Quite possibly both-in-one.

But back to the 'comedy' thing. Getting passive-aggressively and viciously dumped isn't really the impetus for funny. Yet it's a parallel track with Ms. Gay Harden. At least she makes it work for her storyline. And yes, it is NPH's total storyline as well, but his is depressive to a large degree.

It's all fine, but it's not groundbreaking - except that most of the cast are actually queer. It's not going to take a lot of your time should you choose to watch.