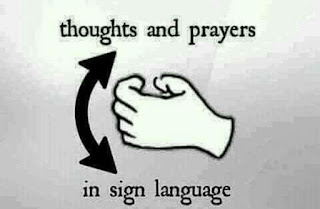 Of course, I feel bad for Highland Park folks and their dead. But the guy is white and Republican. Kyle Rittenhouse killed folks - he's white and a BLOTUS supporter and he's walking free.

I mean, they took him alive, so you know he was white.

Allegedly, I hear (since I don't really read the news anymore - in detail), the TERRORIST was dressed as a woman to avoid detection. So you just know there is going to be a bunch of transphobia and drag queen comments coming.

Fuck them all.  Fuck every single Republican fuck face who votes party line for fear of being Liz Cheney.

Right and Wrong no longer apply. Those words mean nothing anymore. Absolutely nothing. Of course, that is all they were: words. The depths of depravity that politicians and lobbyists (and voters) will go to is just inhumane.

I don't think there is a better word for it.

I too have switched the news off and, I have to say, in some weird utopic (not sure that is a word) way my chakras feel better for it. I no longer talk about politics or war or anything nuclear. Selfish and ostrich like. Probably explains why I have nothing meaningful to blog about.
JP