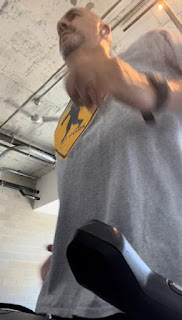 It's the small things that matter.
Unless you're talking about penises, then you're just being nice or lying.
I am trying not to do too many gym updates here, and I still have three weeks before I can weigh myself, though I'm 99.4% sure I haven't lost the weight of which I've wanted.  Yet.
Regardless of 'day' (arm, chest, leg, shoulder, back) I always start out with cardio. And sometimes end with it too. Weekdays are different than weekends, as I don't have much time during the former, due to having not been born independently wealthy.  (Thanks for gambling it all away, grandpa!)
When I made it back to the gym at the end of March, I started on a bike, the moved to a treadmill, and then to the elliptical. But I'm back to the treadmill.
I could have said 'running', but when I got back on that thing, I'm not even sure I could have passed a Silver Sneakers and she'd have lap me somewhere between Orange Jullius and Things Remembered.
For context, I "ran" cross-country in high school. Being 6'2" and all of 110 lbs, there weren't a lot of sport options open to me (and my parents made me join something!).
For the record, I hated every step I took during those four years. Every. Single. One. I never experienced a runner's high. I had no focus of any kind. Or determination. I had a 14 year old developed brain.  Maybe. While I'm sure I "improved" during my time, it seemed negligible.
My first recorded run after being back at the gym (thanks Life Fitness app) had me at a 17:50 minute mile. This was based on if I had actually finished a mile. Which I didn't.
I'd walk. I'd run. Back to walk. I'd find any excuse to not run walk. I've spoken here about the right music - and sure that's a thing, or I made it one. Like my 14 yo self I still had no focus. At some point I abandoned running and went totally elliptical. Maybe that helped me. Maybe not.
When we were in Chicago, I used the hotel gym and went back to running. I've been doing it since.
I really took steps to be successful - mainly not running for more than 20 minutes. Using a pace which I could keep and not get defeated. And yes, the right music.
Over the course of the last month though, things have really changed.  ...and for the better.
While spending the morning a few weeks back with Morty, before everyone (read: anyone) else was up, I mentioned something about working out - and he asked if I was running. This could be a dangerous territory with this man - as he's successfully completed a marathon on every continent (yes, you read that correctly).
Internally (well externally too) my answer was embarrassingly semi-apologetic:  "yes, but only on the treadmill."  His response, while brief  seemingly in passing and non-coach-y, actually would end up meaning a lot to me.  "If your feet are leaving the ground, you're running".
Yes, I've fallen enough times that my feet leave the ground where running is not involved, but I got the point.
In the last month, I've carried his words daily. It's the little things. They have big impacts.
But in the last month, I've gone from 20 minute runs daily, to 30 minute runs on work days and as of yesterday, a 60 minute run.
In the last month, I've increased my speed from 3 mph to 4.9.  And that first 17:50 miles has been shaved to 13:12.
Those stops and starts, or walks, I had been doing are gone. The music now plays as it will and I don't break stride or slow down for any reason.
In yoga, when I was doing that all the time, I learned the beauty of the Drishti. It's the practice of focused gaze, used as a means of developing concentration. It helped me immensely with balancing poses. I currently use it now - not looking at the treadmill with its data, time left or graphics of me running through the woods or on a beach.  I pick a spot on the wall in front of me and that is where my gaze is - for 30-60 minutes. Never varying.
It has made all the difference.
Music is still important. But less so.  You know I'm not a big fan of streaming services, but I plead guilty to now using Apple Music.  I pick one song, and it kind of sticks with that genre the rest of the time. Much of it not from my liberry. It helps me keep the pace without ever needing to slow down or scroll through the phone for the 'next song'.  For that, you'll be getting a few My Music Monday selections coming your way.
Now, I have no desire or intention to run a marathon. Yet my brain works this way: while I run, using the previous day's data, I start calculating at x miles per hour, if I could maintain that for 26.2 miles, how long it would take me to finish.  I then shake my head and try to get out it.
My takeaway is what my 14-17 year old self couldn't do - and what I couldn't do 3 months ago - is focus. That  is key to this. I never enjoyed running because I didn't know how to be successful at it, or at least how to (re)define success.  I'm doing that now. I think.
And I'm enjoying it - except for the first seven minutes. I find, like clockwork, it takes me that long to get the groove and past some physical, but probably more mental, hump. I actually look forward to the run.  I mean, we'll see how long that lasts, but so far so good.
Also?  I've never sweated so much in my life. 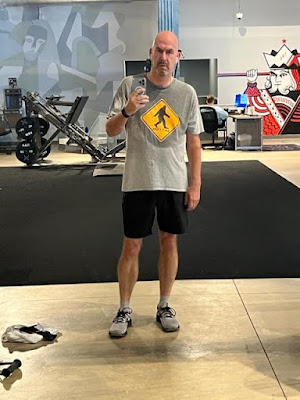 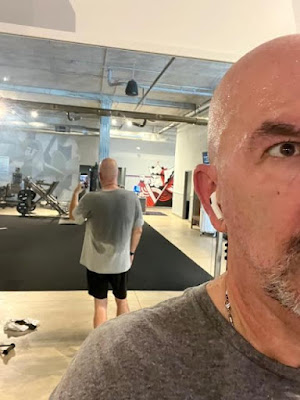 Before I used to take Spin, I really had never truly sweated through clothes before. Spin got me to sweat. But now, it's up like 17 levels. There are times in the locker room I struggle to get my shirt off.  And lying on a weight bench like this?  Ick. Cold and clammy.
So, even if I don't lose all the weight I want, I'm getting something out at my time at the gym.
Song by: Snow Patrol
Posted by Blobby at 12:07 AM

Bravo! If you can move like that for an hour, you are alive.

This is false advertising! You are not blobby at all! Are you auditioning for a role in Fearsome's blog?