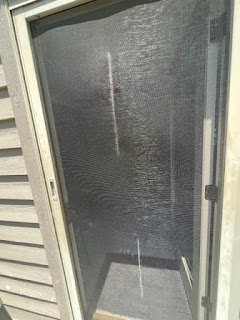 The destruction of this country has left me no time to post anything good. So I am two weeks late in this - as it has been pointed out to me by at least one of my friends.
As you know (or should), I have weekly calls with my closest friends. Call. Singular. But we're all on it. Usually all of us. This has gone on since a month into the pandemic and continues to this day.
They are Zoom calls and usually last 60 minutes or two drinks, whichever comes first. Truth be told, if Blobby is having wine, I can put away more than two in 60 minutes. Mostly in these dark times, we still find a way for a laugh or 12.
But two of the Columbus-ites, are in new houses and well, I wanted to see them. While I can't say we 'forced' a housewarming party for them, we did arrange a time for four of the five to come down in June. The fifth, Jon, lives out of state and naturally harder to get to Ohio.
Dates set, then Jon and I - mostly Jon - conspired to get him up for the weekend. The five of us hadn't been together since my 50th, and even the four of us, it's been well before the pandemic. Three of us got together in early summer 2019 and a different combination of the three made it in May 2021.
Jon and I met in Columbus the day before. The plan was to surprise, but you know, things get fucked up (Becky!), and we broke it into two minor surprises. Both worked well.  People were thrilled that Jon showed up - and tolerated that I had.
Fair enough.
The weekend coincided with Columbus' Pride, but we opted not to go. Actually, I told Morty I shan't be going to that event. That one is great, but it draws up to 500,000 (!!!!) people.  I don't like people that much, let alone that many of them. At once And in one place. And you know - Covid. Superspreader event x 1,093.  As it turns out, no one else wanted to go either.
The plan was to basically sit at Morty's catch-up and drink. Not necessarily in that order.
I could say we were a modern day salon or Algonquin Round Table.
I could say it. But I could say a lot of things.
And in today's environment, it wouldn't necessarily be untrue.
I'm sure we discussed current events and our distress at them - and this was before some of the SCOTUS rulings about which I've been writing. And while we have had some time to talk of the past, a lot of time was spent on the present.
When you've all been friends for ~34 years, and you're all still alive, the topic of age and aging comes up. Honestly, more than I'd like it to, but you know, it's reality of our time and situation.
No one makes me laugh more than these four others. And many were had, one where I had a hard time stopping and the joke was at my expense.
I won't lie. Drinking was involved. I believe Morty has a case of wine owed to him - and that's just my share. It started with beer. I even alternated with water. Until I didn't.
I may - or may not - have walked through Morty and George's screen door.  (psssst......I totally did.) 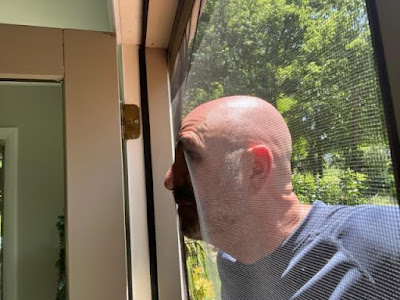 *
Laughing was had by all. At my expense. Again. Different than the last one. At least Morty asked if I was ok................10 minutes later!  I was. My big ol' nose smarted on the left side a bit, and my pride was mortally wounded, but other than that.............fine.
....and then we broke open the rosé .......because we finished all the white. Not that just they had, I mean ALL the white.
And in the light of day (see top pic), apparently my knee went through it too.
Oddly enough, the next morning I woke up slightly later than normal and with zero hangover. It was like old times with these guys, except now I have no hair and am about 60 lbs heavier than I was "then".
We all hung out for most of Sunday too. I was the first to go, as Jon wasn't leaving until the next day, but I had work - and had a 2.5 hour drive home.
We made a promise to do this yearly, and I hope we can. A nine year gap is far too long in between, especially at our advanced age.
I am glad we did this before the abortion, EPA and gun relaxation rulings. It would have made for a far more sour weekend. And then someone would have had to go buy more wine.
I had not been this happy in months, so it was all worth it.  Except for the screen. That needs to be rectified.
* this is a reenactment
Song by: Dr Hook
Posted by Blobby at 12:07 AM

I wonder if they deliver white wine in bulk, kind of like heating oil?

You should have been screened. “before “ attending.

Oh the embarrassment; oh the pain.
I think we have all done this at some time. I remember more than a few times walking into a closed glass door.