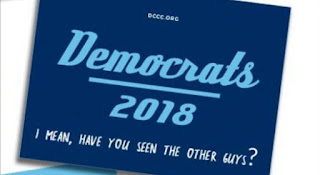 There was a line in the debut episode of HBO show, Newsroom.

Jeff Daniel's character says to another panelist: If liberals are so smart, how come they lose so goddamned always?”

Look at this fucking lame-ass campaign the D-triple-C is doing.

So from that earlier Daniel's quote: maybe liberals are not so smart.

What fucking genius came up with something so lame that it could have been  passed off in a middle-school lockerroom? It comes off as petty, at best. There is already a Chief Petty Officer:  SCROTUS.

....and if we are going for petty, like it or not, no one is going to do it better than Dump.

Why in the world would I part with my hard-earned dough on something so faux thought out as this, when they'd take my money and doing as ill conceived as this marketing campaign?

And I've said it before, "we" don't take the high road most of the time, though "we" pretend we do. But we don't play dirty enough. Not enough to win.

I have hopes that once (or if, in this case) we obtain office, we do more of the right thing. I never believe any politician does the right thing most of the time, let alone all............you just got for best case scenario.

I'll be honest, I don't know the difference between the DNC and the DCCC.  I believe the latter is the money raising arm of the DNC...or so it seems. It took me eons to get off their lists after my break-up with Howard Dean. I'm certainly not giving them $$$ now.......and certainly not for this.

Song by: Depeche Mode
Posted by Blobby at 12:02 AM

this is so fucking LAME. and I want to see a REAL leader in the style of barack obama before I contribute anything. so far I ain't seen nothing yet.