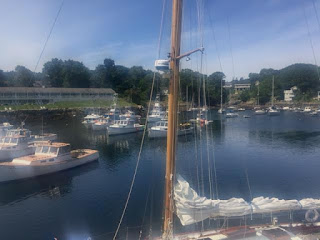 Nothing too too much to report from vacation. Three full days and I haven't even been tempted to look at my work email.  That is both liberating and a little scary at the same time.

Our adventure started off with a delay at the airport. The problem with taking Jet Blue is that in Cleveland there is only one gate. So if there is a mechanical problem there are no other planes. Jet Blue only flies to / from NYC, Boston and Ft. Lauderdale from the 216.

While we waited (and waited) for word about when and how, both 710 and I took separate strolls, as the other would have to stay with our luggage. ....and to hear any potential update.

A woman next to me struck up a conversation. In short order, we found out we were both headed to the same destination. She - Monica - had never been.  We chatted about the town and what there is and isn't to do.

During this, an overhead announcement about something in the 'gray area'.  Monica laughs and goes, "did they just say the 'gay area'?".  Blobby's back went up, but he said nothing.

As it would turn out the laugh wasn't anything to which I perceived. During my walk, 710 spoke with Monica and it turns out she was meeting the woman she's been dating for almost a year, in Boston and driving right to Maine. She had asked 710 if we were married and thought it was cool that we were.  So far we have not seen her in town.

We've only been in Maine for the better part of one day - the first two were in Boston. So far I've been averaging about 25,000 steps per day, so I can basically eat whatever I want......or so I think.

Last night while at dinner, it was one of those meals where 710 and I barely talked. I was fascinated by the table of four women next to us. At least one of the woman only spoke in French. And at least one of the other woman only spoke in English. Yet the latter was speaking to, or answering questions from, the former. Clearly one could understand English while the other did the same in French, yet they never conversed in the same language.

When it came time for their check....or cheque, as the case may be.....they asked - if it wasn't too much trouble - for separate checks for all four of them. The key-ute waiter said it would be no trouble at all.  I turned to 710 and go: "he's lying".

Shortly afterwards, the key-ute waiter came to bring us our bill. I asked him if he could split it into four. He chortled.

He made both 710 and I burst out laughing when he came back with four of those black book thingies where one puts the bill. He totally made my night.

John got extra on his tip just for that.

Song by: the Dave Clark Five
Posted by Blobby at 12:04 AM

Key-ute, huh? Was he the head man of his tribe? Okay, you can slap me for that one.
When I go out with my girlfriends, I make sure to have enough to cover the check. We never ask for separate bills but I hate when everyone pulls out their cards and expects the poor server to figure out who to charge for what! I don't go out with more than two friends too often!