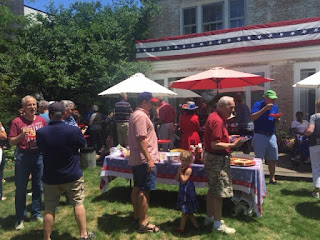 Another Fourth come and gone.

More or less for the last dozen years, it's been relatively the same: neighborhood parade, neighborhood picnic and then watching fireworks from a neighbor's patio.

I'd like to say we did something excitingly different this year, but alas we did not.

We attempted the parade. It's a lot of kids and dogs. For some reason Shep is kind of dick to two dogs in the 'hood. Naturally, both dogs were there. Just waiting around for the parade to start was too much for him. He snapped a few times, but got along with others I think had we arrived later and just started walking, we'd have been good. As it was, 710 took him home.

I had every intention of walking in the parade, but as it was kicking off, two friends were taking a walk through the 'hood.  So we stayed and caught up.  I invited them to the picnic but they had other plans.

Admittedly, I ignored invitation instructions - which asked for desserts. There are always too many and too few sides. I went with a side. But that's for another post another day.

And we skipped fireworks at home......for ones at Jacob's Field. Yes, we had tickets to see an Indians - Padres game.   You guys won, Fearsome. 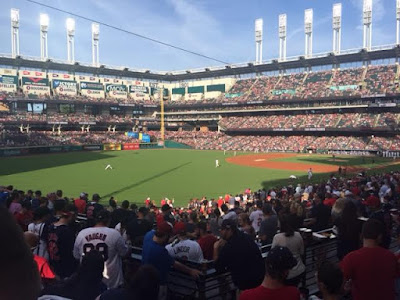 It was a beautiful day and a great night. ....except for the loss.

As it turns out, we did not stay for the fireworks. It was Shep's first 4th and we weren't 100% sure how he'd be. He has been great during thunderstorms, but fireworks can be different.  He seemed to be ok overall.  ...the grand finales made him sit up.....but no shaking.

I am not a patriotic person by nature......but let's face it, this year it would be really hard to get it up for this country. There is zero to crow about.....except that North Korea can probably only hit Alaska. Let's hope it's Wasilla.

Song by: the Tragically Hip
Posted by Blobby at 12:01 AM

my cats hid under the bed last night. and the padres come here for weekend baseball; fearsome and I will be trash talking each other.

Our dog does fine with the fireworks, but the cats get a little bug-eyed at the noise.

Sidenote: Bette Midler Tweeted that she didn't feel like celebrating the Fourth, but maybe next year, if _____ is in prison, she'll celebrate "InThePenDance Day."
I'm with Bette.

Padres won? Looks like I'm going to have to get caught up on more than just reading my blogs!

No fireworks here for some reason (too hot? too dry/dangerous?) so there were no nervous pooches.