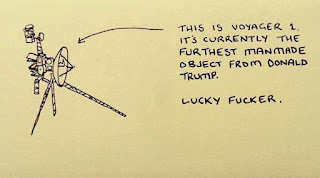 Sooooo many Dump-isms this last trip, plus Dump Jr and Dump-in-law and their foibles. It's like their stories are nesting dolls......and new and different one with each unopening.

Don't get me started on that twat, Ivanka. Though I do love how it was a Russian G20 goer was the one to take and release the snap of her sitting in as faux-president for a faux president.

And it seems Bitch McConnell and SCROTUS can't get that black man to ever leave. By all accounts the current Senate health care bill is dead in the water. It seems the GOP is the last to know, since not one person has said, "huh......this sounds great!".

Articles on CNN.com have one saying "Health Care Bill on the Brink", the next one, "Pence: GOP is Close to Repealing Obamacare".

I think we know, Pence is just a mouthpiece.  ....unless it's a tie in the Senate. Then he's just a nightmare.

And the protesters being dragged out of the captiol.....including wheelchair bound folk. THAT has to look for the GOP, though let's face it - they don't care. They're not about caring - unless it was a Goldman Sachs colleague who got in the way, then like the White House Press Room, they'd be banning cameras on the Hill.

That's all I got.

Song by: Michael Penn
Posted by Blobby at 12:04 AM

I saw footage this morning of a wheelchaired protester being pushed from the building.
That screams volumes about the GOP.