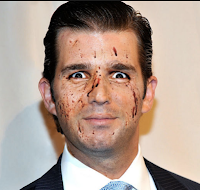 You all might know that I've "joked" about Qusay and Uday in the past. But in reality, I had more respect for the originals than the half-assed Dump Boys.

Like them or not (and really, who did?), the Hussein boys were up front about their work and took pride in it. But they too had a horrible father.

I honestly do not know, or have any comprehension, how folks like Qusay Jr. and Uday Jr. can even look at themselves in the mirror each morning - - assuming they have any reflection at all.  (I'll assume they don't or they'd have had seen a plastic surgeon post haste.)

There is something completely psychotic about them - both of them, but for the most part today, we're sticking with Qusay Jr.

I am truly at a loss. I think I've said that before, but they keep topping themselves. I'd say I have no reason to have an ego, though we all have them, so said Freud, but there is an ego and then there is an EGO.

Mind you, Daddy led by example. Certainly a bad example, but one nonetheless. But the inability to know right from wrong, or worse to know it and completely discard it just baffles me. Especially on a national stage.

In a certain way this email thing (didn't Hillary have an email issue that the Dumps drove into the ground with every breath of their voice?) is delicious. Qusay Jr's "transparency", of which his father speaks, is such a transparent joke, as his released emails came about 38 seconds before the New York Times published them.  Oh - and that problematic issue of - there was no meeting.....there were no emails thing.  I suppose 'transparency' is all relative.

Can no one see through all of this?

Yet it frightens me. If there are no repercussions by the American people - i.e. the Dump supporters - even in the slightest, we've gone down the road as a nation from which we can never recover.

That whole he can shoot someone in the middle of the street in broad daylight and get away with it thing - is really a thing. And now it seems to extend to son-son-and daughter.


Who the fuck knew that the bastard-ette, Tiffany, would be the normal one of the family?

It's said that Saddam Hussein's sons, when babies, were shown men being tortured - and were taught, by following their father's example, to laugh at their cries, groans, pleas and tears. I can only assume that that D.T.'s offspring were similar inured not to be ashamed of lying by following daddy's example. It now seems like second nature to the whole family. They just don't know how to behave any differently.