It was Shep's big day out yesterday.

His first at doggie daycare. Usually (well, always), Shep has a dog-walker, but as we prepare for vacation, we were checking out options.

And who better to watch him than lesbians? He already has lesbian dog-walkers.

Amanda is allegedly very selective on the dogs she takes - some are on a waiting list for over a year. Shep was on a semi list for about eight months. She currently operates out of her house, but is opening her training / boarding / daycare place in October.

For our part, we were just hoping not to get called mid-day to come pick him up - afraid that he just might be a dick with the other dogs.

Spoiler Alert: we didn't have to.

While I was in training, I got a call around 15:30 that I missed from Amanda. I was worried when I saw it. But then I got a text:

"He is AWESOME. He's making tons of friends".

"I haven't had such an easy day dog in a while. He loves to be with a group" 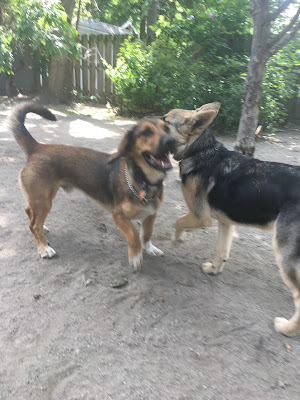 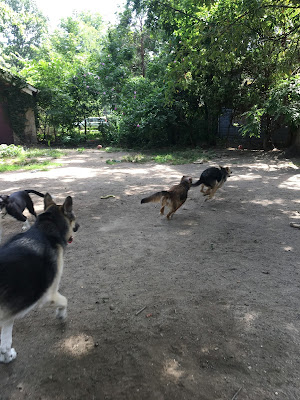 Shep losing a chase. He does not like that. When he's behind, he whines. The first time it happened I thought he was hurt. But if he ever gains the lead, the crying stops.  What a manipulator. 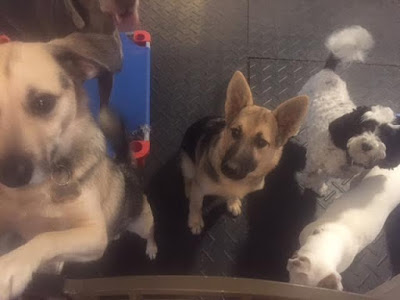 Bella, the Shepard, is apparently Shep's new girlfriend.  Or a girl....and his best pal. She is sooooo pretty and sweet. Of course Shep loves her. ....and the ears.  the ears.

But it's the dog on the left who was so very starved for attention.  She just made it past everyone else for my pets, scratches and to give kiss after kiss. I would have gladly taken any of them home. Even Grady, the Jack Russell.

I wanted to pet them all, but the one on the left wouldn't allow it.

Shep on the other hand was out there with me, but playing with the cats. Sure - THOSE cats he plays with and doesn't try to pounce on. As 710 said, "maybe they'll teach him some manners".

So, Mr. Shep will be staying there while we are away.  No crates unless warranted. He can sleep in the bed or a sofa.  This makes us happy.

Hopefully there will be more pictures of the happy couple.

Song by: They Might Be Giants
Posted by Blobby at 12:03 AM

such good news; now you can vacation knowing shep is well looked after.

Nice to find a place that takes good care, and that Shep loves.

I live in a doggy day care it sometimes feels like.

It's a pleasure seeing dogs in a pack happy in their lot.