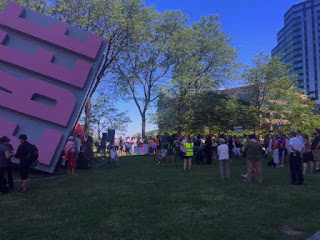 What could be more patriotic than that??  Nuttin'.....that's what.


Until you find out the alternative if we do could be sooooo much worse, that is.  Pence?  Or if he goes with SCROTUS, then......{shudder} Paul Ryan.

That said - those scary men aside, shouldn't we all want to stop a truly mentally unbalanced man from holding the position of President? When one of my sisters, who considered voting for him (but didn't) thinks he's mentally unstable, well..............wouldn't you think more people feel the same way?

So this past Sunday, multiple cities had rallies to impeach SCROTUS.

We went to the Cleveburgh one, if for nothing else than to take Shep to his first political rally.  ....and his first known urban walk, but mostly the rally.

He was unimpressed. And for good reason.

I have no idea who organized this......or disorganized it, as the case may be.

Let's just say: for the millions of people who don't like Dump, I was, on one hand, surprised at the lackluster turn-out. On the other hand, it's a holiday weekend. People have plans and like it or not, they won't change it to un-support a sitting president.

I think the problem also lay with the word 'impeachment'. People want action now, and impeachment, if it were to happen, takes time. People aren't stirred up enough to bother being bothered.....or to take time out to show-up.  Sure, there was the woman's march.......but as Ms. Jackson once spoke-sang, "what have you done for me late-leeee?".

The lack of crowd was only part of the problem. Lack of truly good motivated speakers  which is kind of a must at a political rally was painfully obvious. That those speakers addressed many-a-thing, yet few directly about Dump and fewer about impeachment. I love being left uninspired to do a single thing after attending one of these..................not!

A huge downturn was the adjoining rally for #blacklivesmatter.

In theory, I'm all for that rally too. Except they just performed a dick move about having it along with, when and where as the impeachment one.

The 10 of them - yes I counted - set up shop about 25 feet from the impeachment rally, co-opting the opportunity instead of being able to do it on their own. And for what little size the planned rally was, theirs was louder. Hell, even their "leader" came over and interrupted the speaker of the intended rally - and really what could the speaker do?

You can't stand there and denounce a #blacklivesmatter person. Their hashtag pretty much prevents you from doing that without fear of being labeled #racist.

After said woman went back to their set-up space, you could hear her bitching about how white our crowd was (and it was!) - and why they weren't being supported.

While I knew better, I wanted to say - why do you think anyone should ditch the scheduled event to pay attention to your cause.......and btw........the main event was white, but there was no reason you couldn't join in a participant.

I'd like to say we stayed till the end, but between the interruptions and the poorly chosen and prepared speakers, I was getting diddly out of this event. So we took Shep for more of an downtown walk, giving him 3,401 new things to smell of which he's never had the chance. I mean, someone should benefit from this outing.

Maybe the next one will have more support behind it........from the organizers and the public.