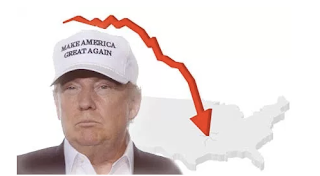 Any good accountant will ask you: "what do you want the number to be?".

I love spreadsheets and numbers. And in theory, numbers don't lie.......except they do... all the time. You can make numbers tell a story, even if it's a tall tale. The question is - which tale is tall, if not all of them?

Rueters reports that 88% of people who voted for SCROTUS would do it again. In a way I'm surprised by this news.......in ways I'm not.

This comes hot on the heels of Dump's über-low approval ratings of 36....the lowest of any president in their first six months in office in 70 years.

.....and another poll that says 1-in-40 (that 40%) want to see Dump impeached.....which is slightly higher than wanted to see Nixon get the same treatment.

Yet somewhere in between those three polls is another one: SCROTUS could shoot someone in the middle of Fifth Avenue and not lose most of his support. 45% say they would still approve of him even if he shot someone to 29% who say they would disapprove, and 26% who aren’t sure one way or the other.

That question was a joke during the campaign, but now it's no longer funny.....if it ever was. And actually, now it is sounding like a challenge, which is just frightening.

This doesn't seem to upset his "christian" "base".  Oh yes. Double quotes.

It is unclear - at least to me - who the fuck these people are polling. It almost doesn't seem random. I get the 88% folks polled were already Dump supporters. They're blind - also not believing there were any discussions at all with Russia, even though Dump Jr admitted to it.  So there, is blind, then there is blind!  Mary Ingalls had better eyesight.   But the poll was looking to see amongst the base, how much if any, support SCROTUS has lost.

If true that only 36% approval of all sampled were registered voters from both parties, I feel pretty good. If it's just Independents and Democrats, well then...........not so much.

I cannot quite reconcile the Impeachment and Shooting poll numbers. Clearly the latter are supporters. What they don't probably tell you is the next 45% would say it was "fake news". The remaining 10% probably didn't understand the question.

I'm sticking with the disapproval rating. Regardless of who does the polls, he has been in the 30s and low 40s for most of his presidency. He can laugh it off all he wants - he's still going down as worst president on record.

Even if all these polls tell a story, it's not one I care to read.

Song by: Kraftwerk
Posted by Blobby at 12:06 AM

As a Trump supporter said to me recently regarding the collusion with Russia..."Who Cares?" I tried to explain why we should care but was met with a tired "well Hillary and her emails" I reminded the person, Hillary isn't the POTUS.
So no...the supporters I've interacted with don't care...they're just happy the POTUS is not Hillary nor any Black person.

Jonny said it best. Trump knows he can literally commit crimes and his minions won't change their minds.
Just as long as he doesn't help minorities .