Insane in the Brain 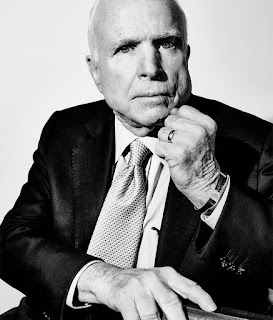 Perhaps we should have seen John McCain's glioblastoma coming. His rambling at a recent senate hearing and of course, his selection of Sarah Palin as a running mate in 2008. Apparently he's been experiencing symptoms that affect memory, speech and cognitive reasoning for at least a decade.

I've referenced it before, but in 2008 New York had an article on the then-presidential candidate McCain saying the John McCain of the 2000 election wouldn't even recognize the one from 2008 - a republican once the voice of reason was then devoid of any kind of logic and compassion. He was forced into it, you might say, by the Right.....and then later by the Tea Party. Say anything, do anything to keep your job.

....as it turns out, he'd need that job to keep those health benefits.  Oh, the irony.

Speaking of irony.......as this current administration and Congress descends into madness, once again, McCain is the voice of reason.

Oh - don't get me wrong - he's still a douche, but by comparison he seems sane. It's all relative.

Glioblastoma is a nasty disease. I admittedly raised an eyebrow at a news article stating that "they" were considering treatment options. Radiation and Chemo for the disease is nasty........and about a 0.00000000001% chance of survival. I've yet to hear anyone who goes into remission from this.

But if you wanna fight it.....fight it. Medical advance aren't made all on lab rats. Sometimes you need human subjects too. Personally, I'd stick with my quality of life.....while I still had it.

I'm still fuming over the Palin thing. Nine years later and she's still around and he gets to die.  Lucky bastard.

Song by: Cypress Hill
Posted by Blobby at 12:09 AM

It's near-headline news here this morning too, B. I'm just wondering if D.T. is going to suggest that McCain's condition might 'explain' his critical and less-than-fulsome-support for his Presidential self. I wouldn't put it past him, knowing how prone he is to putting his foot in it. (Actually I'm hoping he DOES say it!)

Why do we encourage 80 year old's with terminal illnesses to "fight with all they can?" I agree that Palin was the worst thing he did.

I bet mccain is happy he has the ACA now!